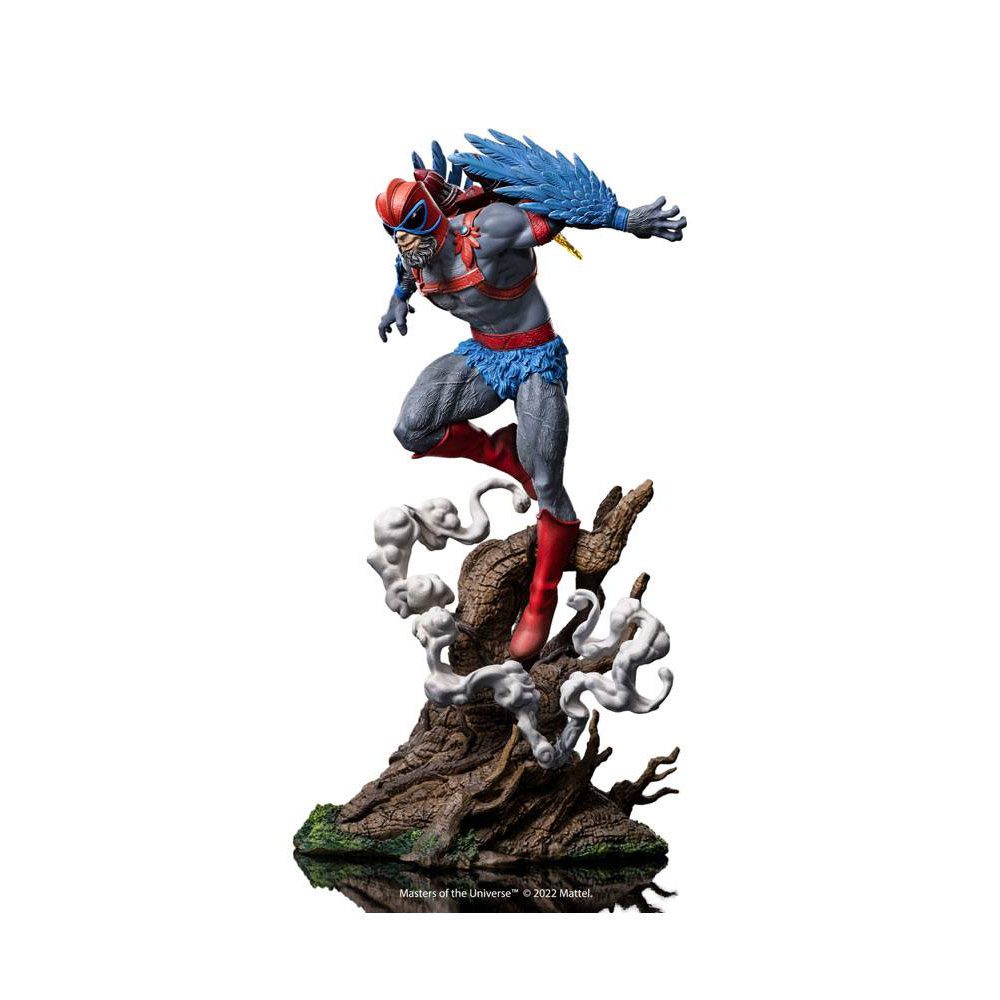 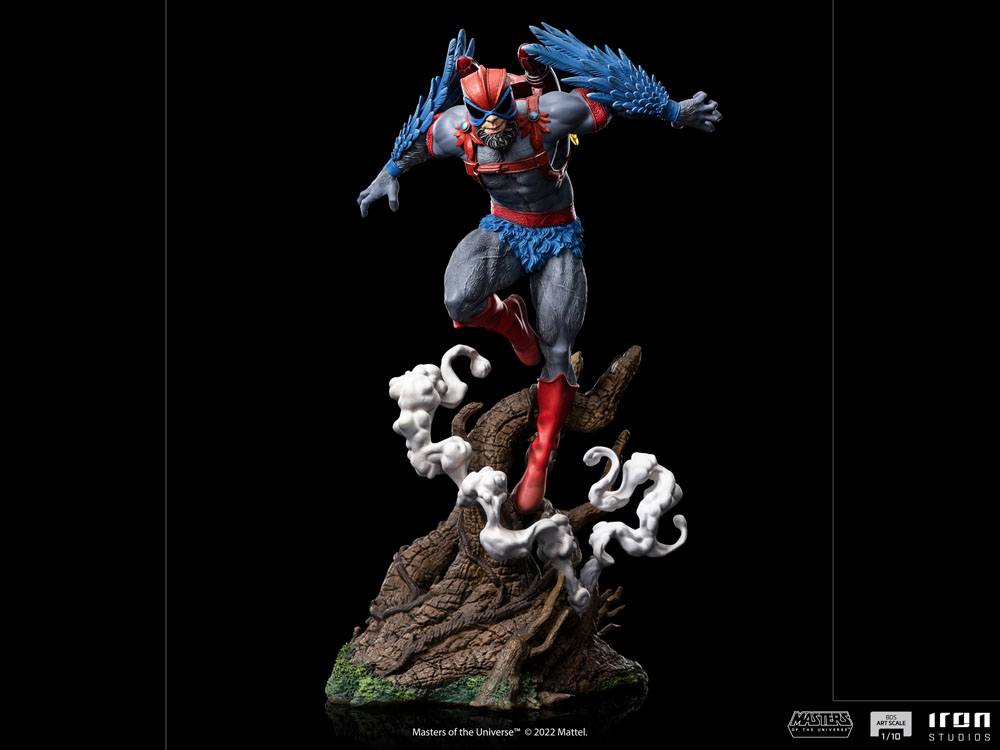 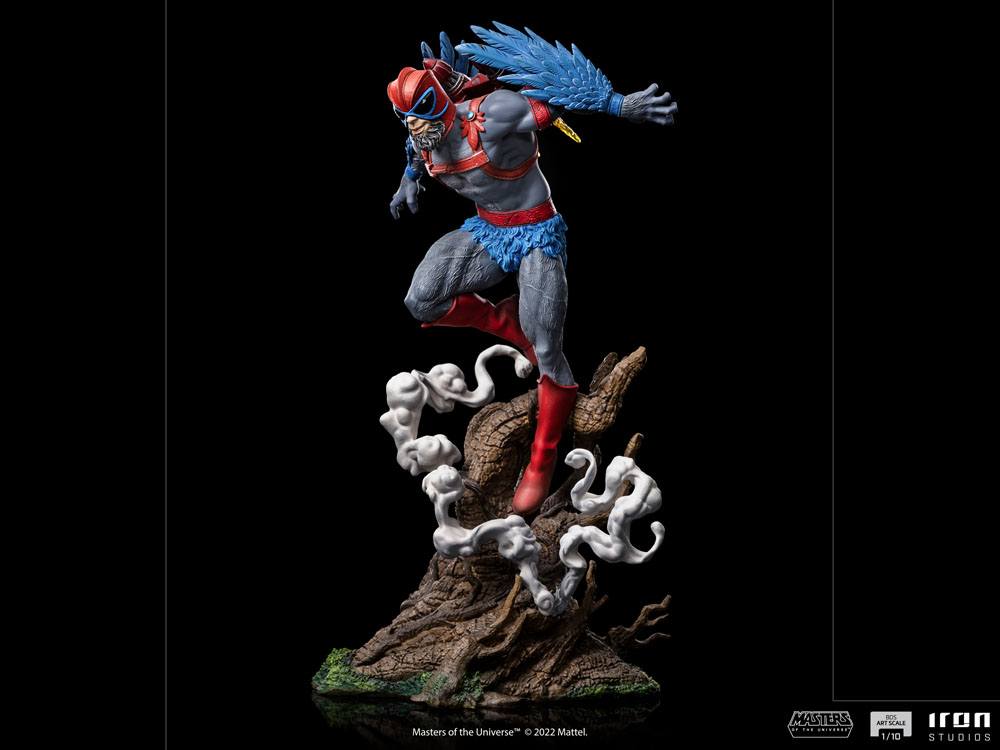 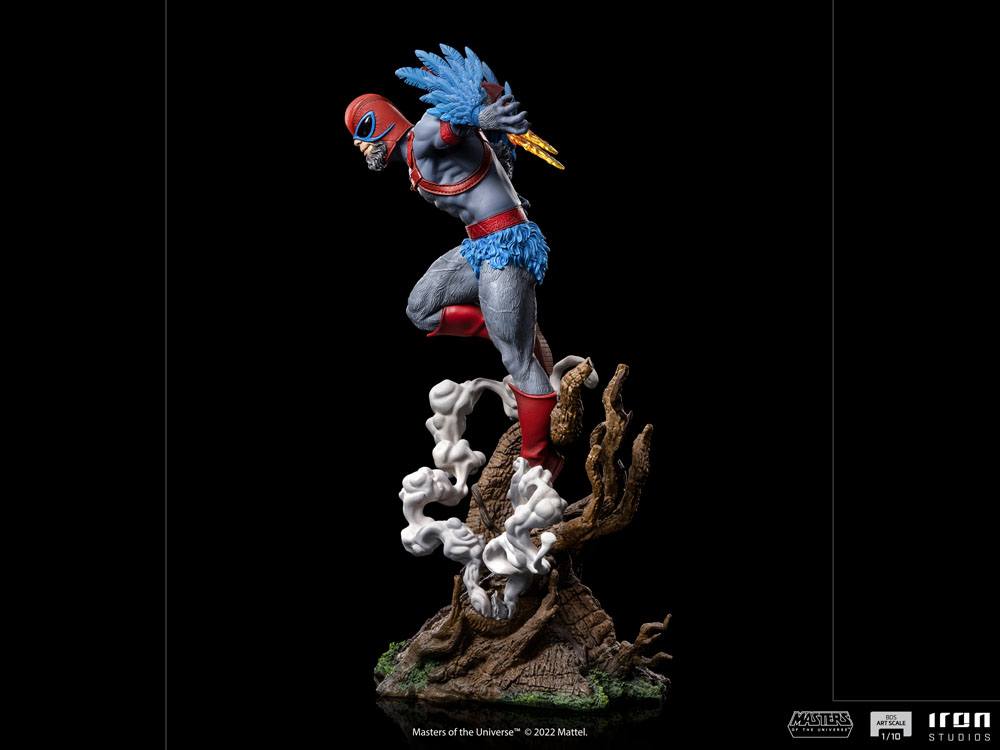 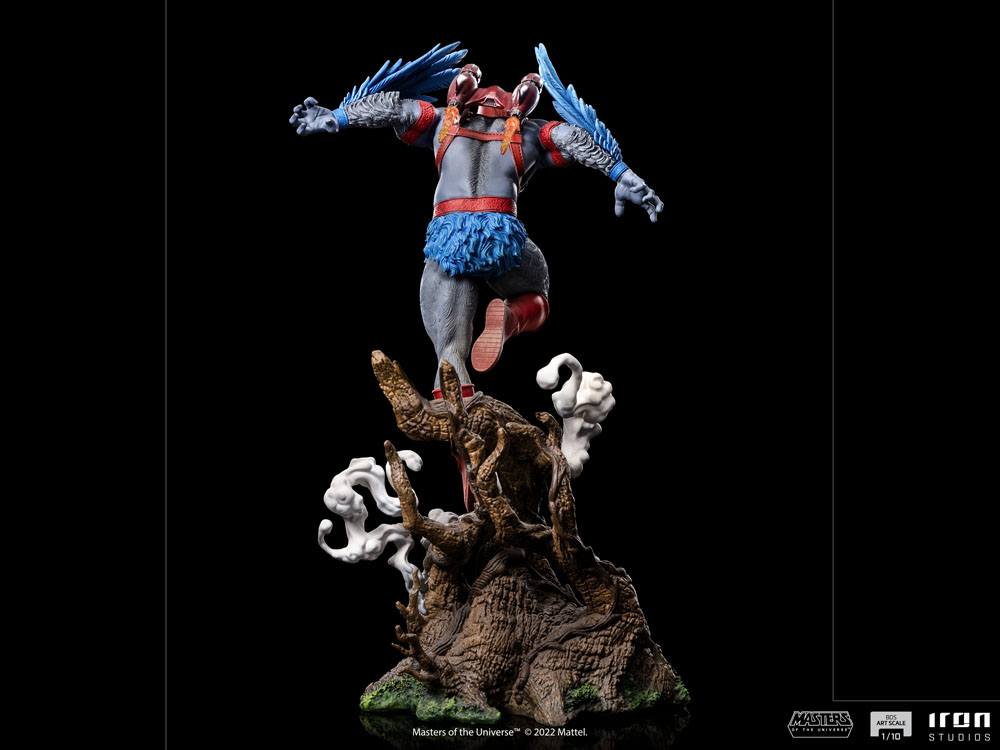 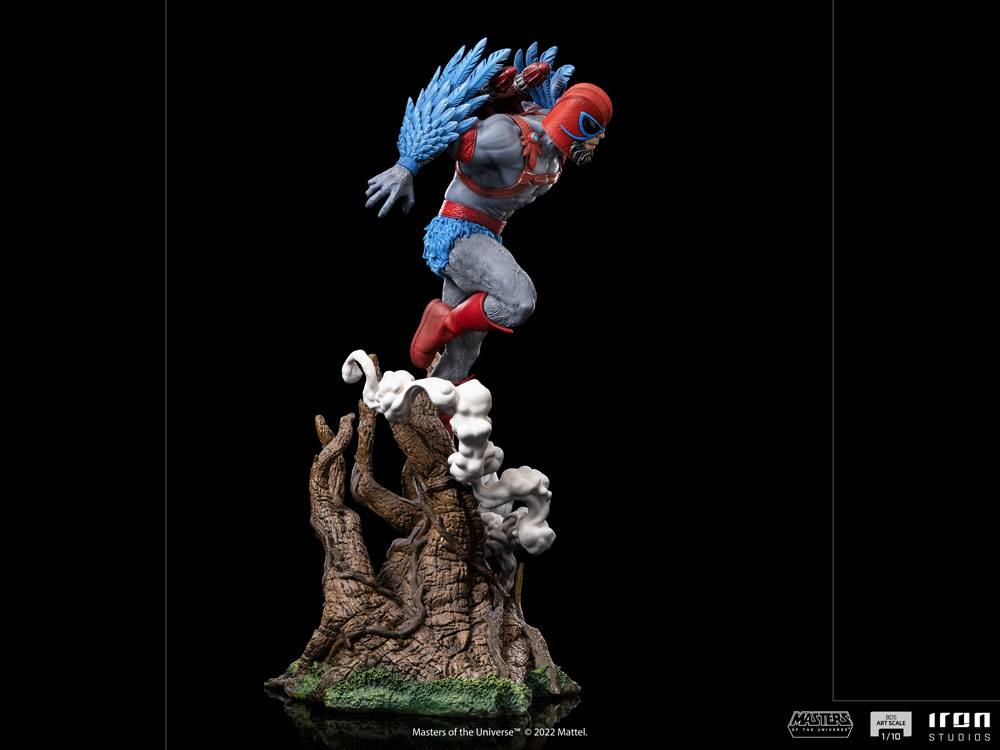 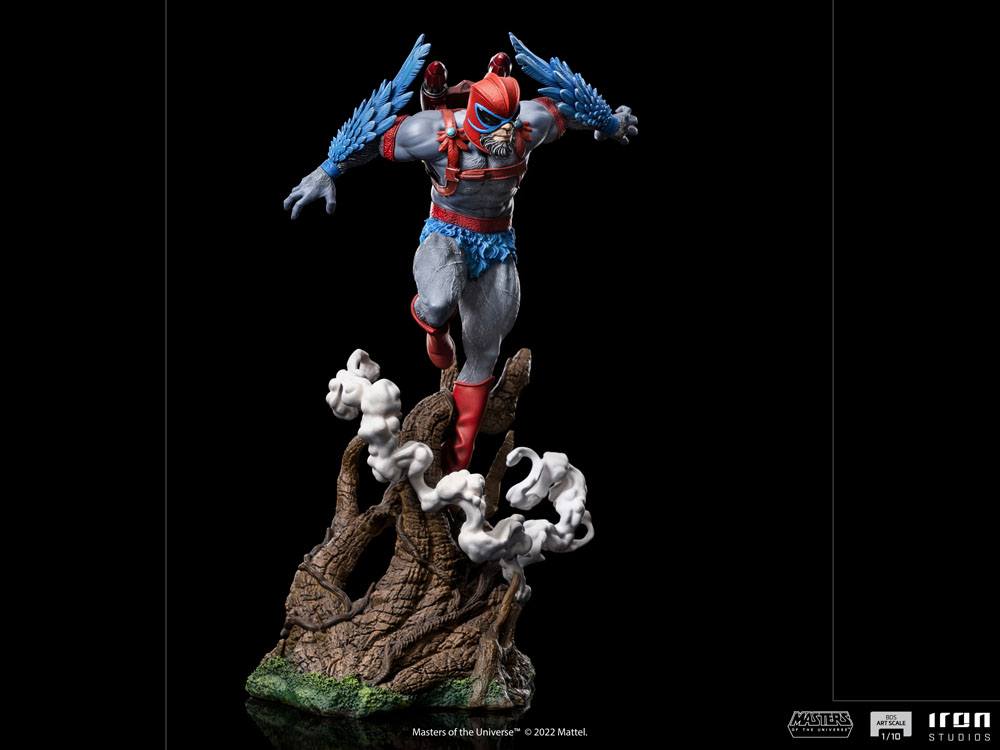 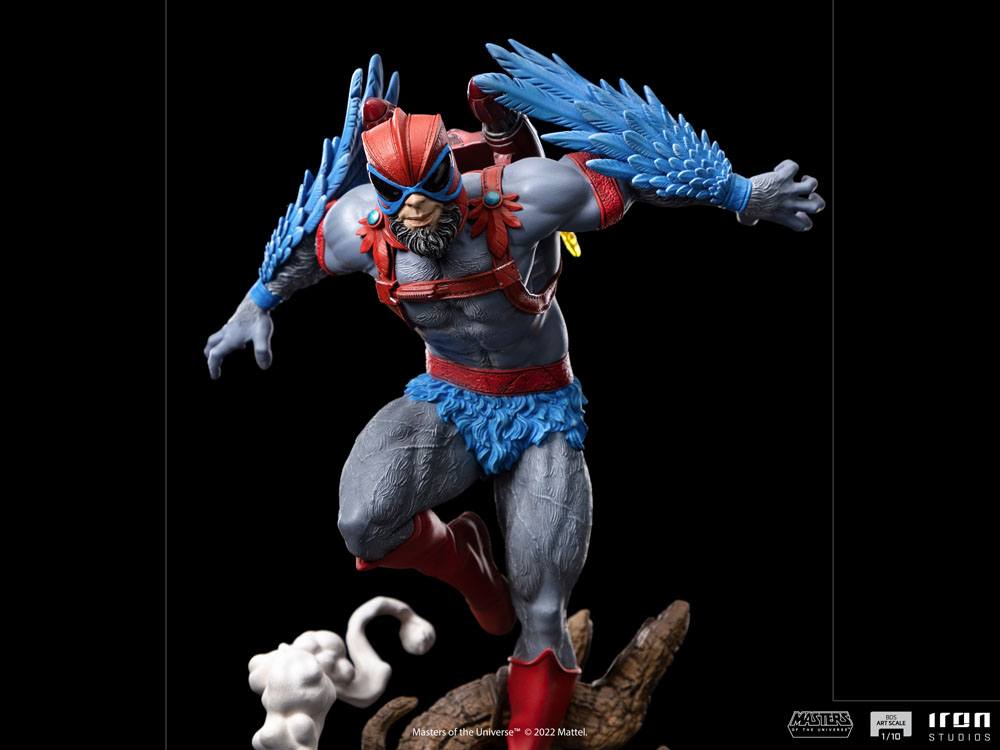 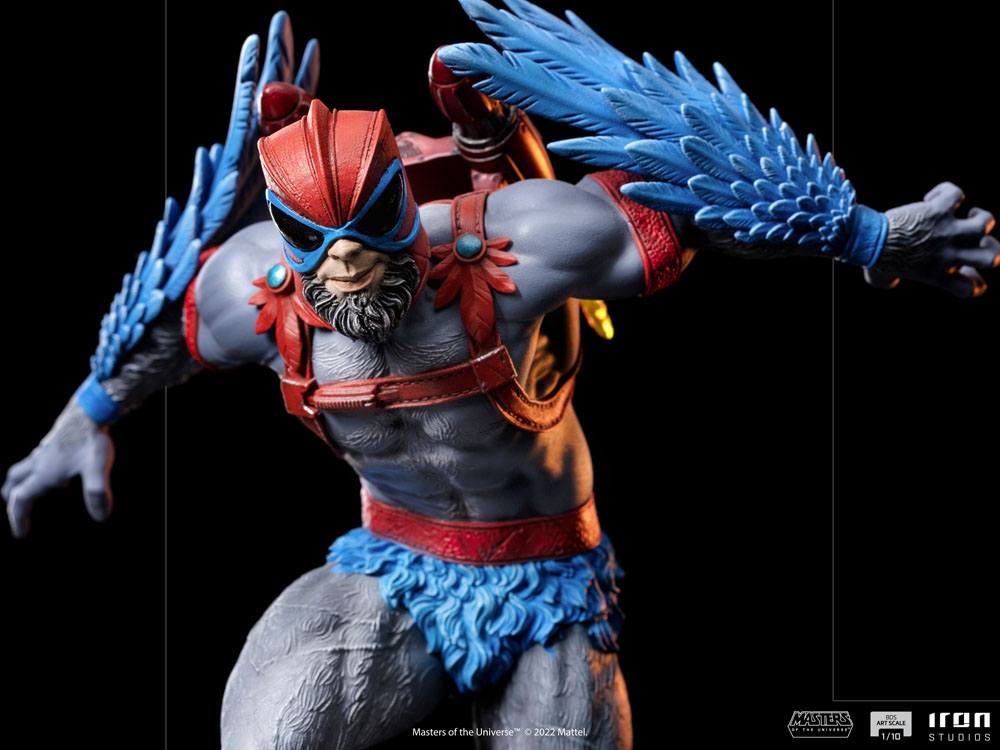 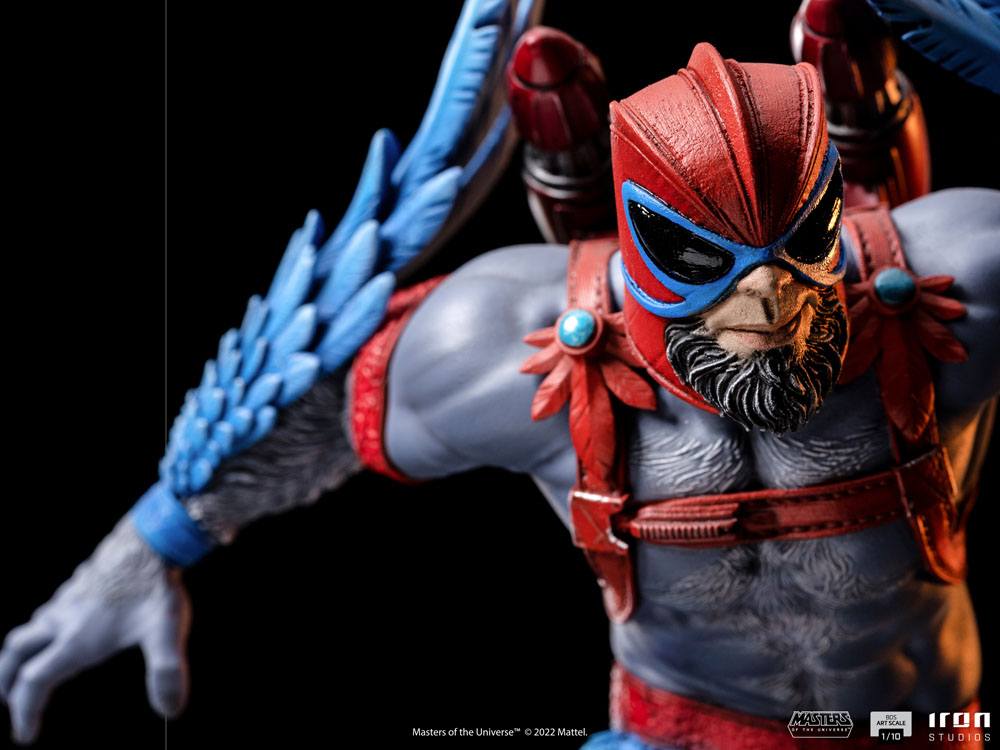 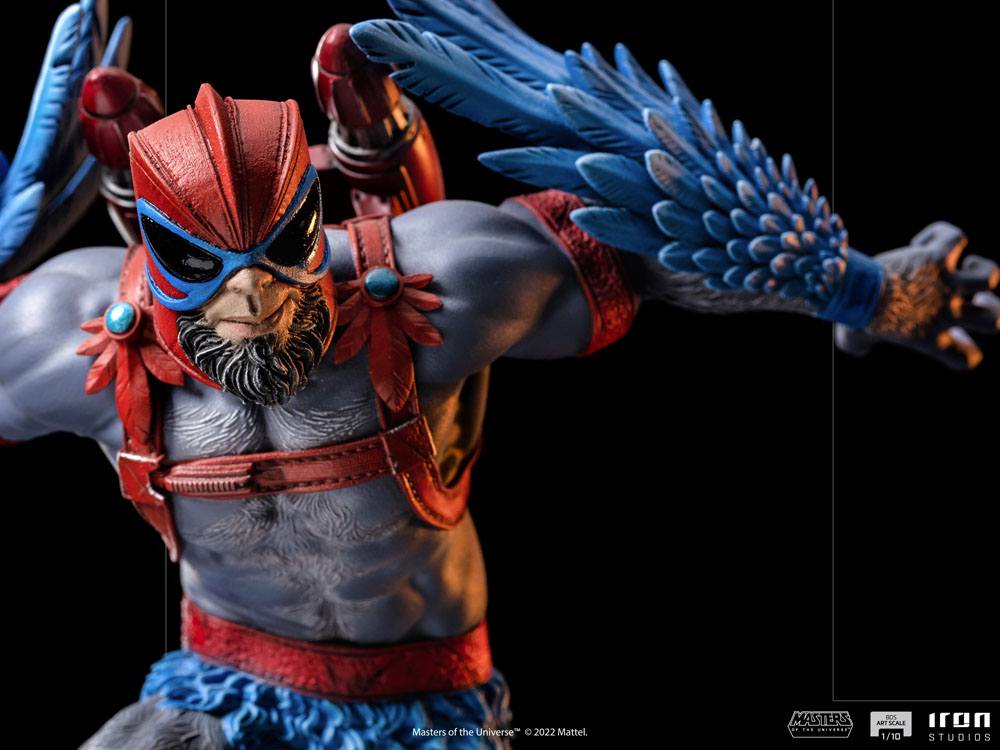 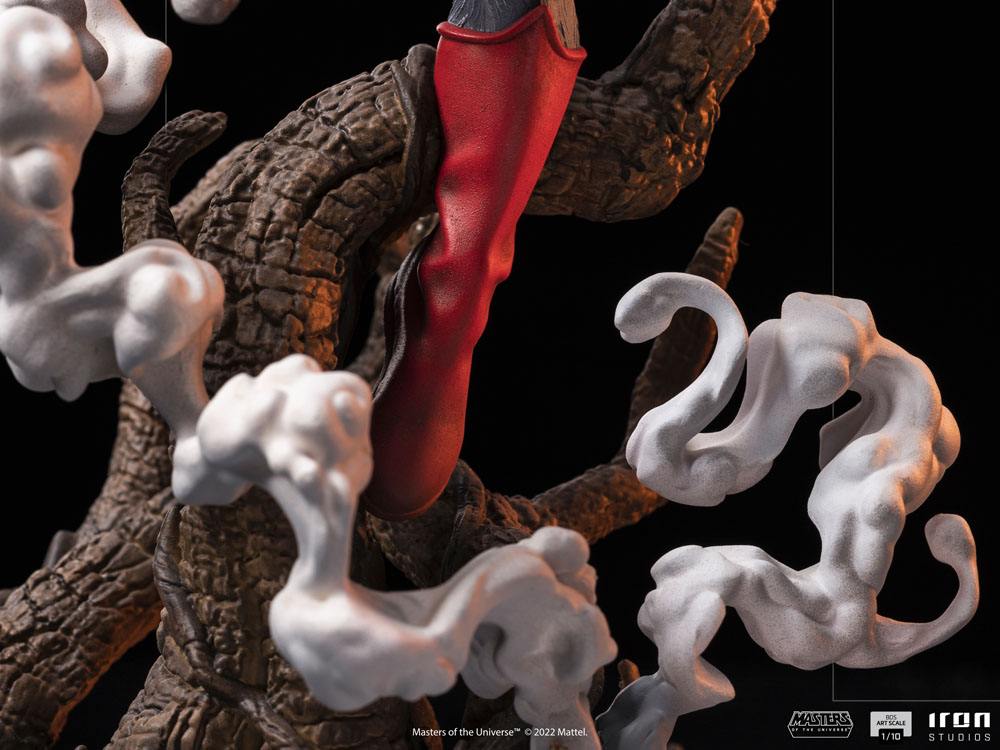 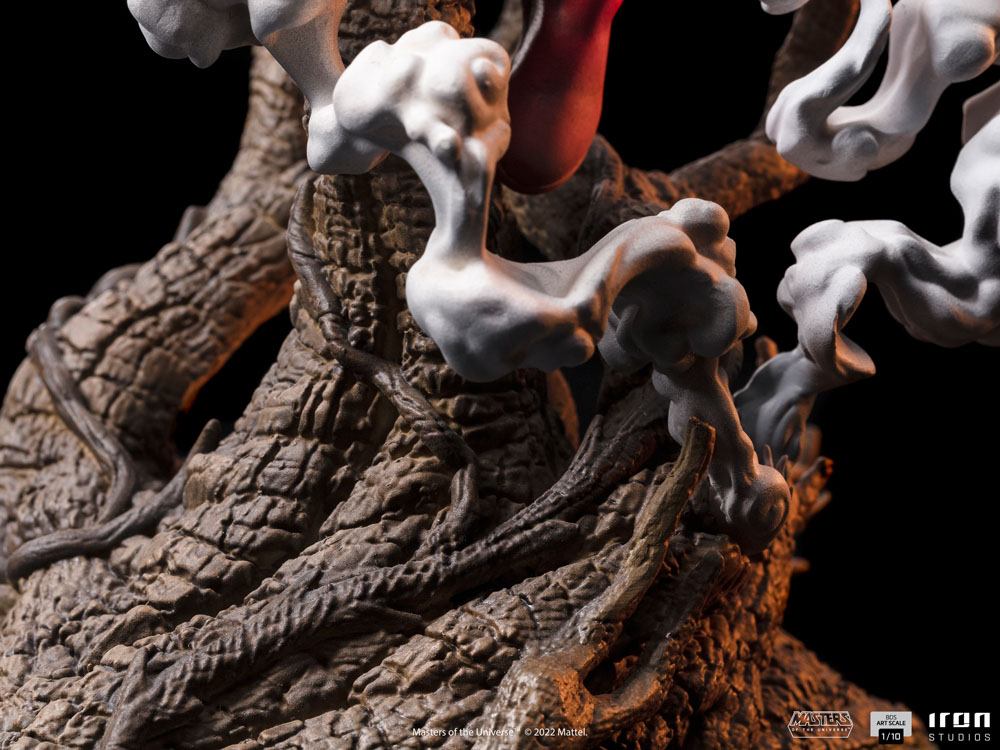 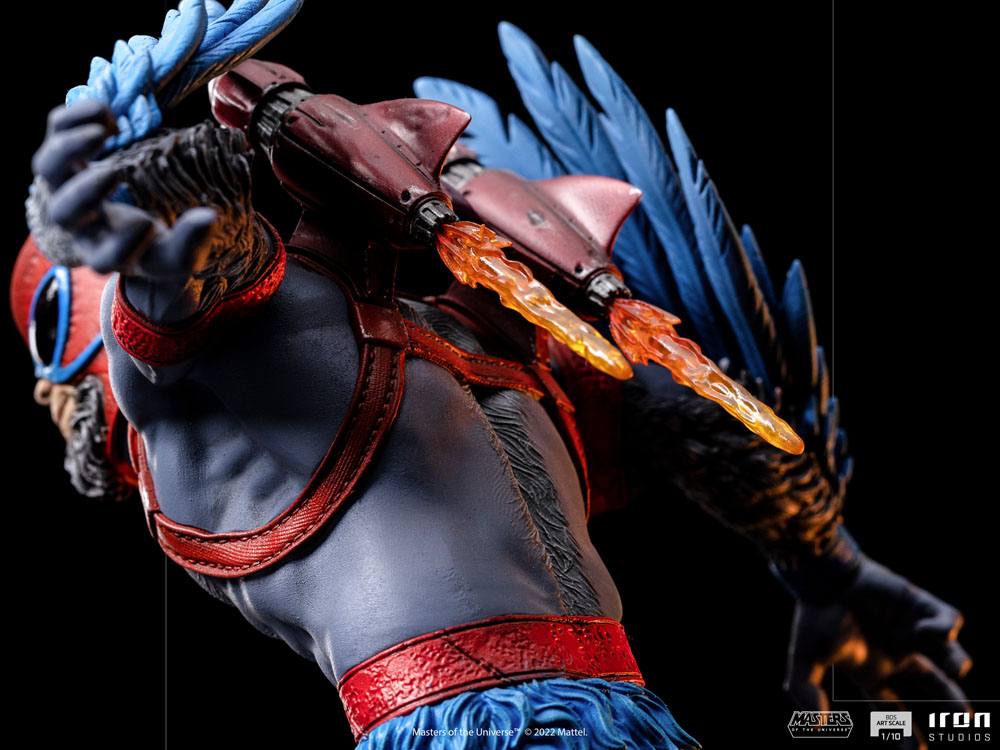 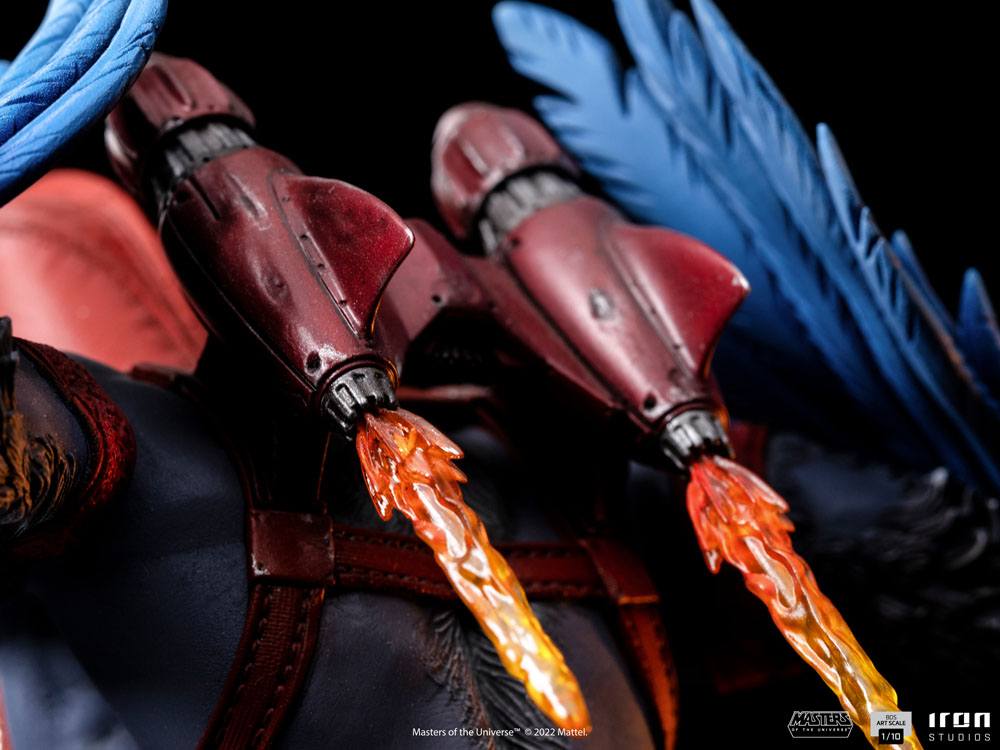 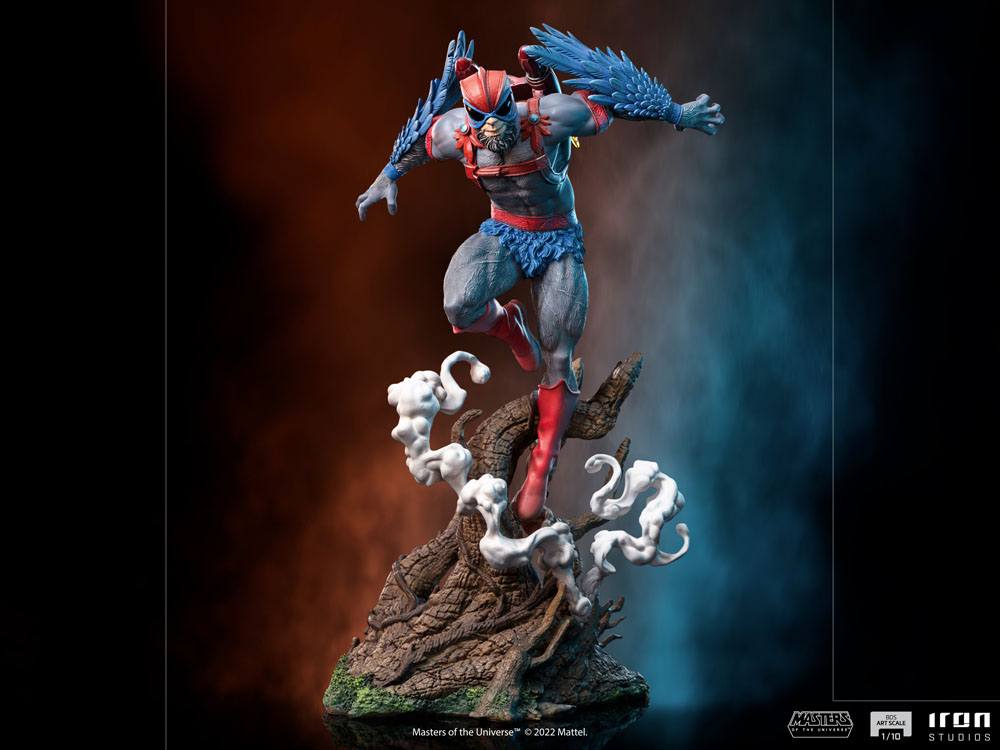 From the top of the peaks of the Mystic Mountains, between trunks and ramifications of the local vegetation, cut by the ivory and white mist from the high-altitude clouds, the noble and heroic winged warrior takes flight, confident and powerful in his natural habitat, his bravery, leadership, and aerial acrobatics skills make him one of the most valuable allies of the Masters of the Universe in their fight against the evil forces led by the sorcerer Skeletor, the lord of the Snake Mountain, and his minions. Bringing a jetpack on his back to enhance his flight speed, and with his sharpen eyes like a bird of prey, besides being a great fighter he acts like a sneaky spy to the heroic warriors, defenders of planet Eternia. Expanding their MOTU collection, Iron Studios present the statue “Stratos BDS Art Scale 1/10 – Masters of the Universe – Art Scale 1/10”, with Avion’s monarch and ally of He-Man.

Leader of the Bird People, a race of flying apes that live in the aerial city of Avian on the top of the peaks of the Mystic Mountains of Eternia, Stratos is one of the most reliable warriors between He-Man’s heroic allies. As a child his village was destroyed by Tycon invaders, an ancient species of winged bug-men, and only Stratos and his sister survived. Finding survivors from other villages of Winged People attacked by the Tycons, Stratos got more than released prisoners, he also created a force to oppose the Tycons who continued to deplete their resources, until the Bird People established a new home in Avion, electing Stratos as their king.