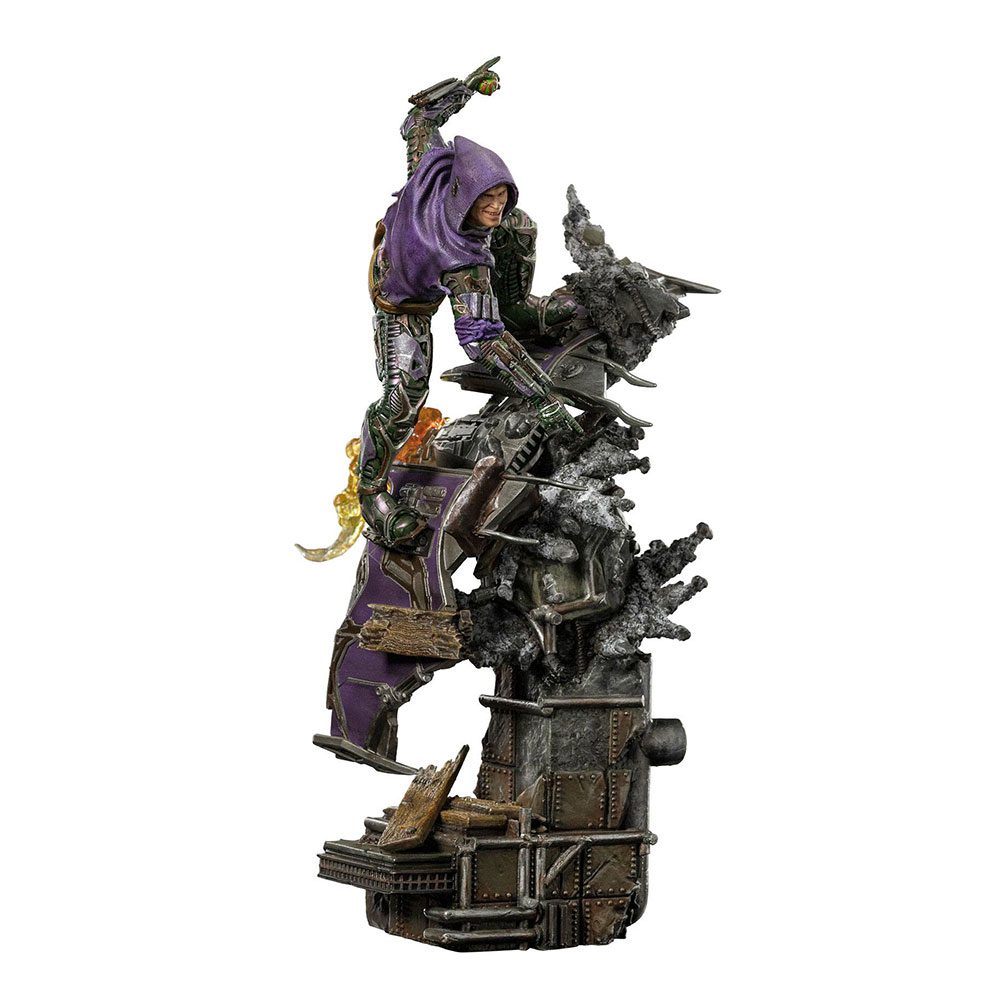 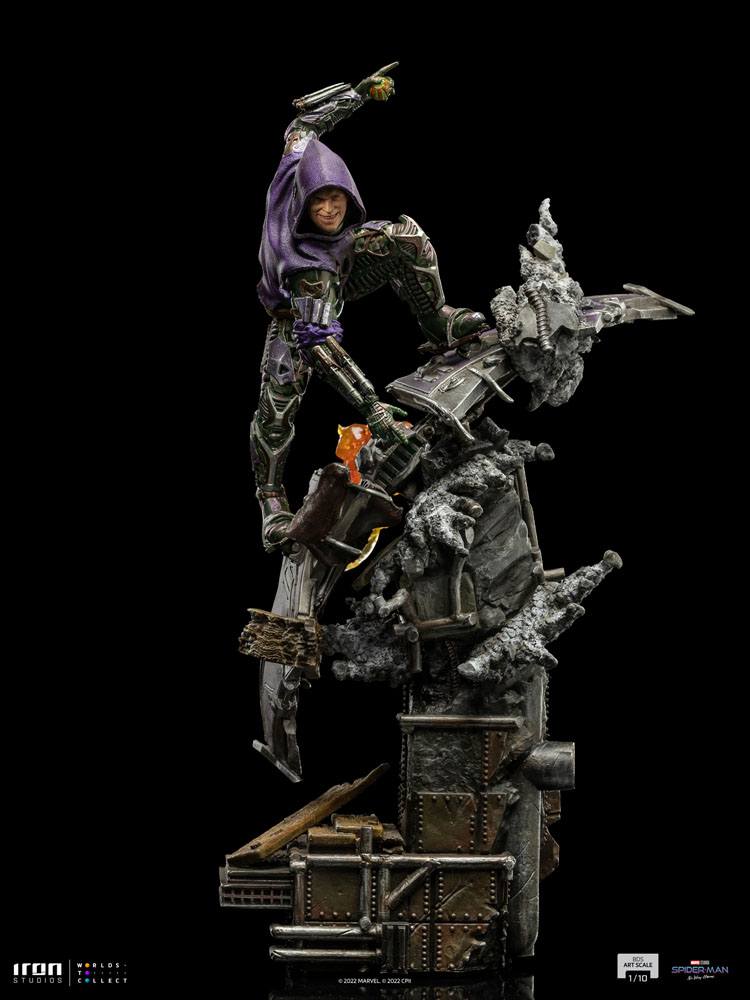 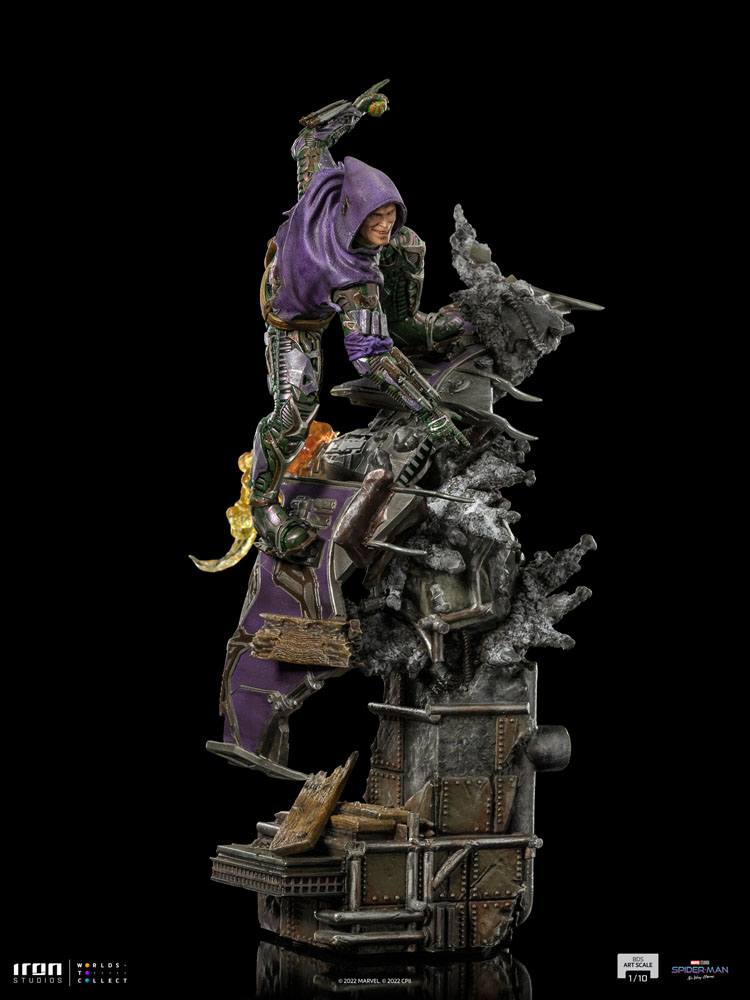 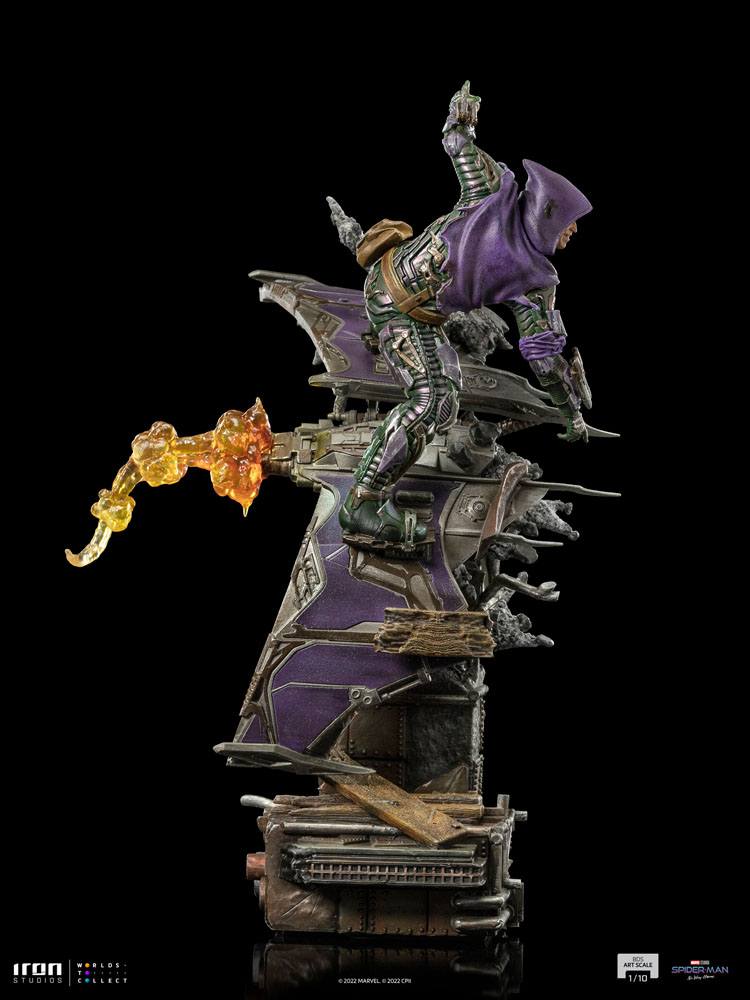 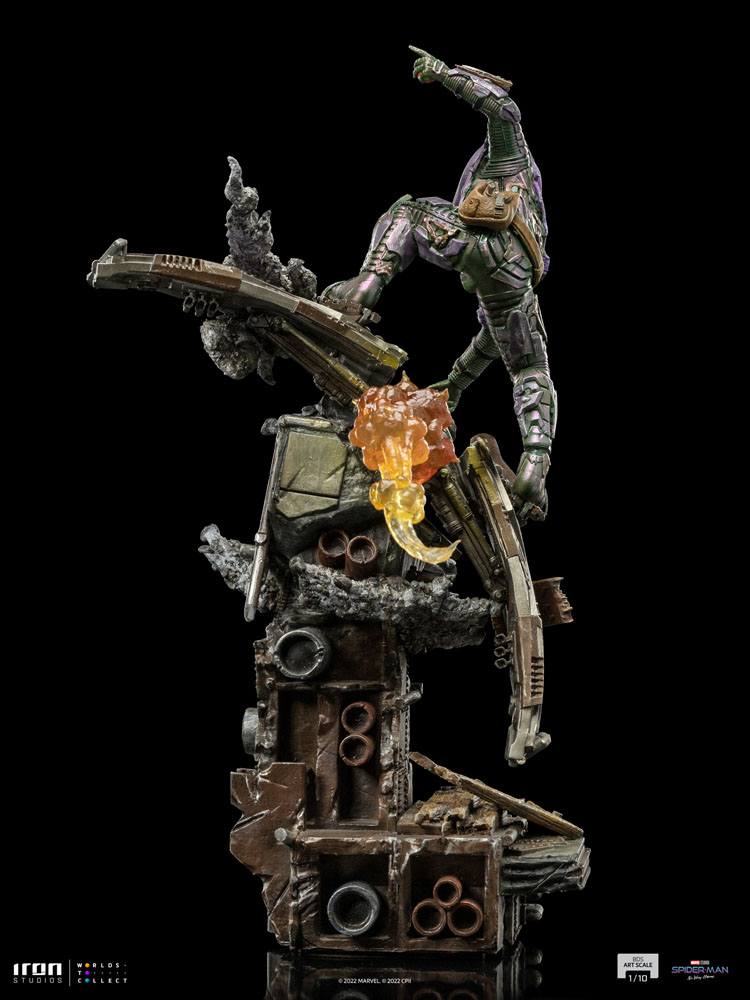 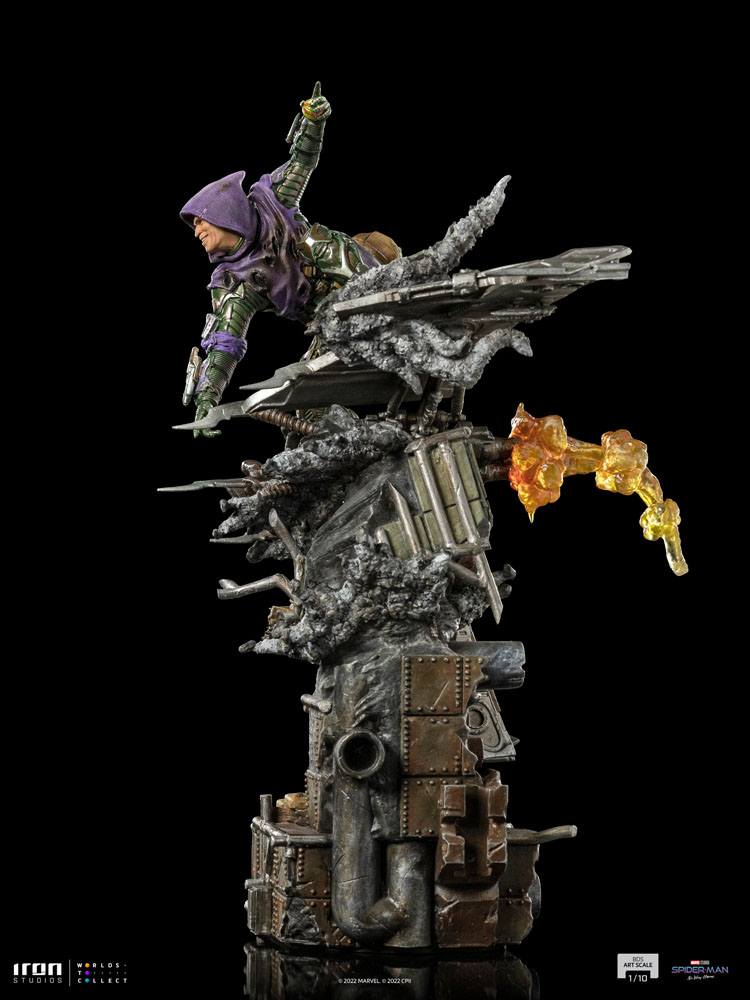 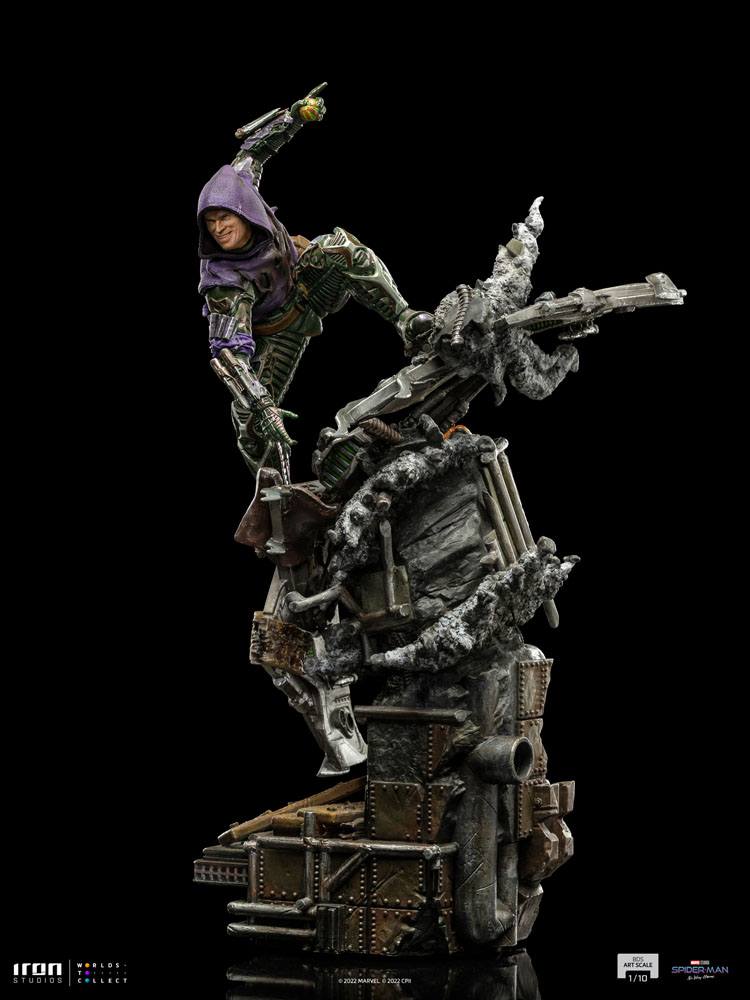 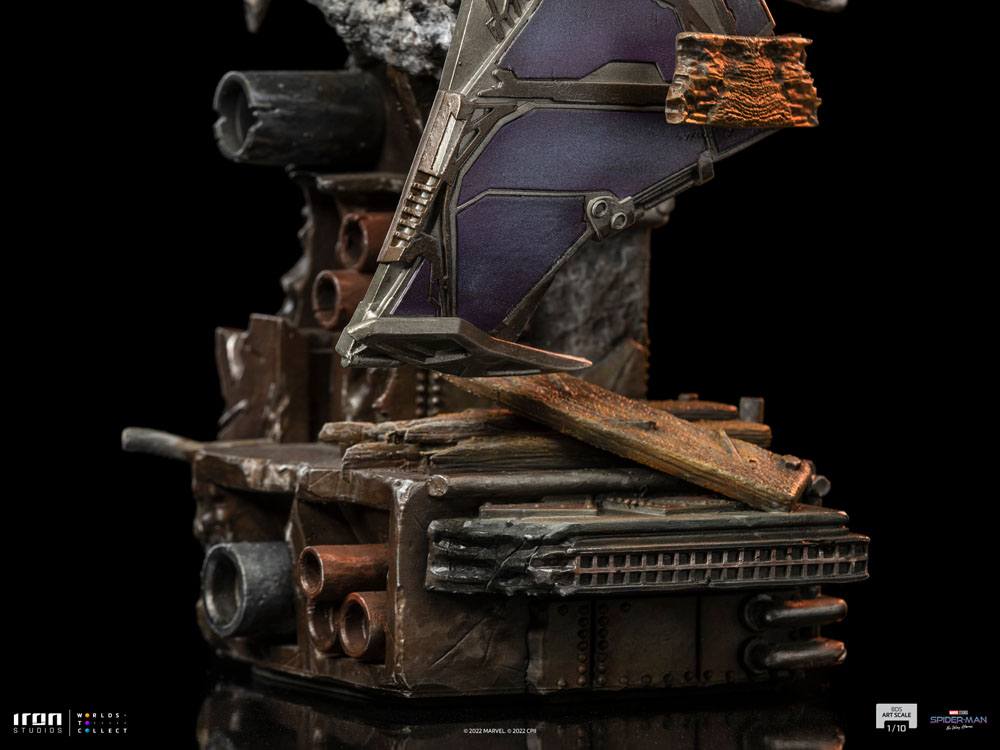 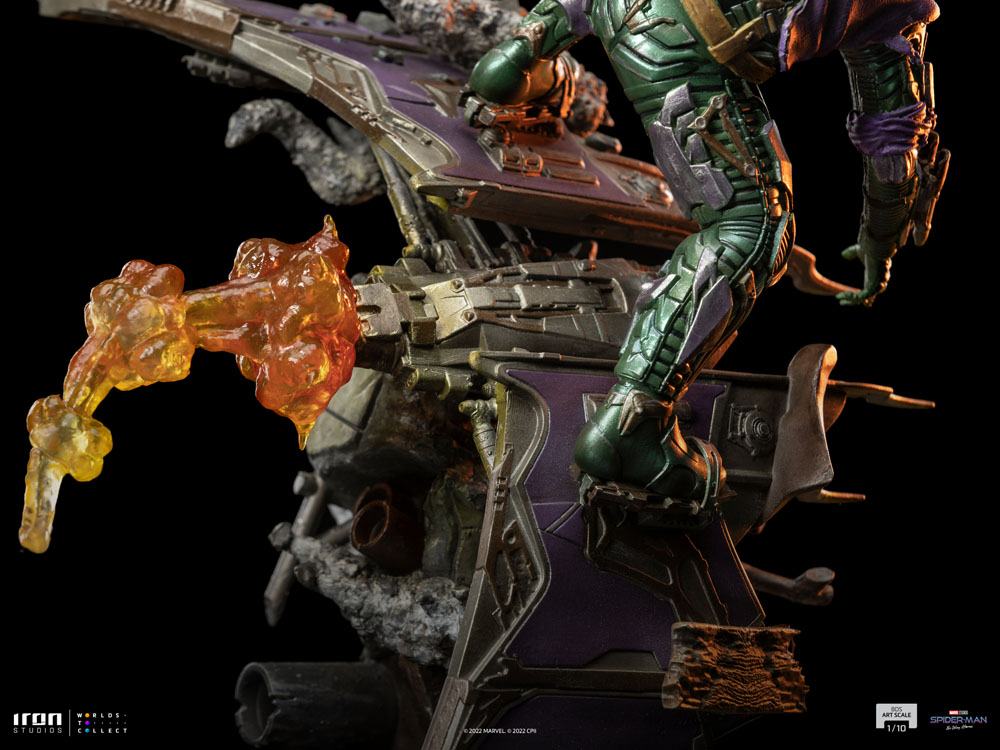 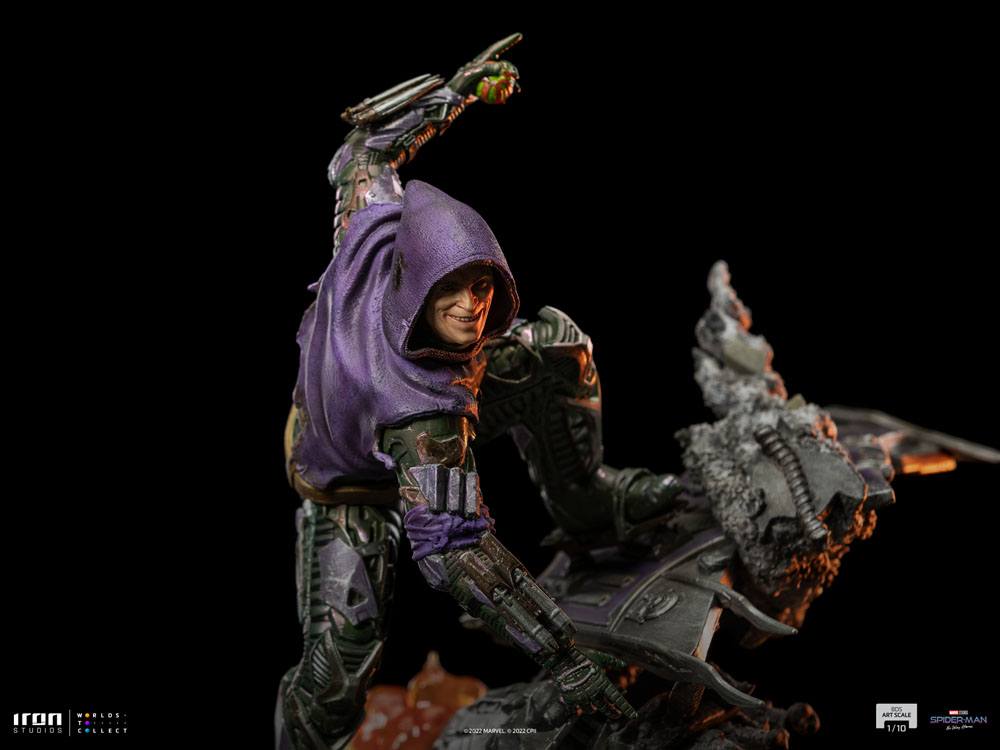 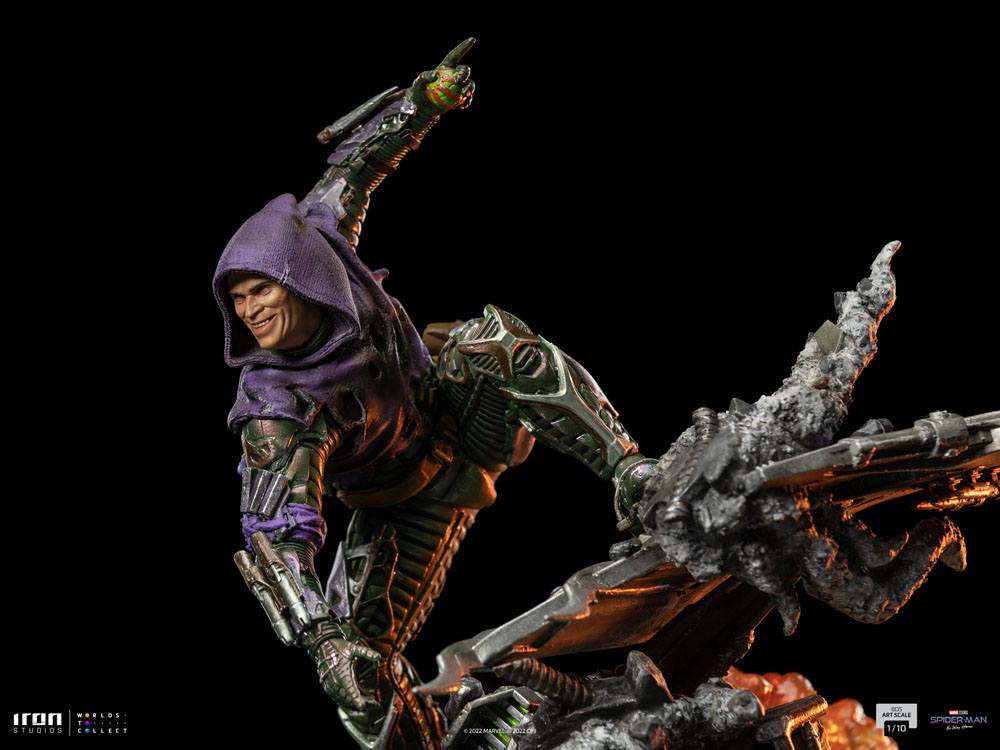 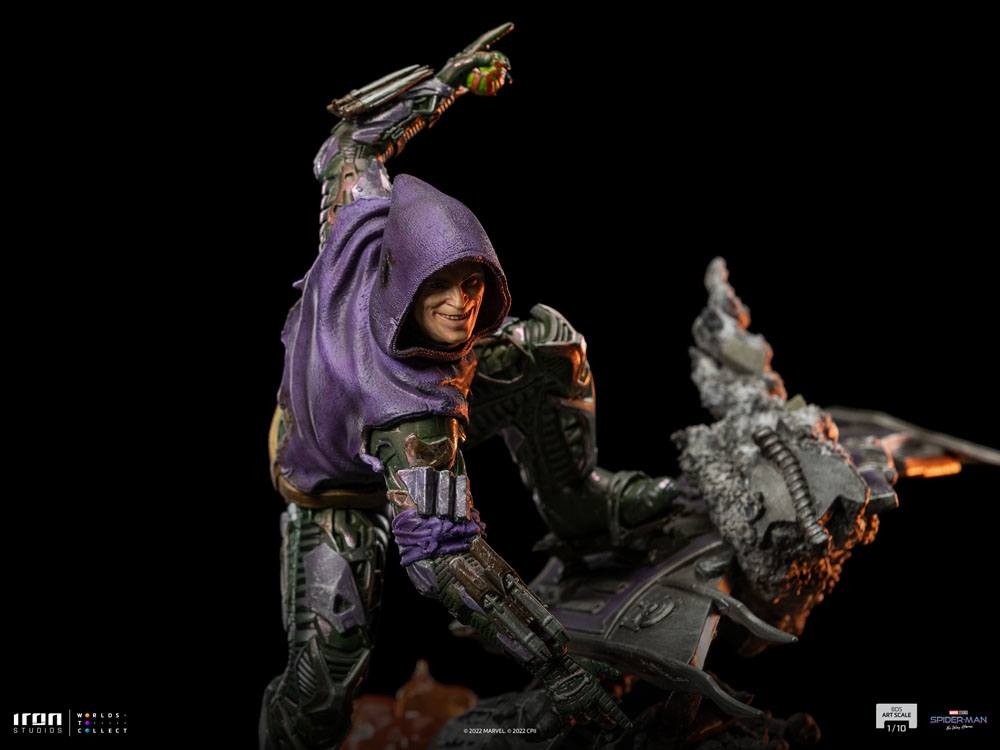 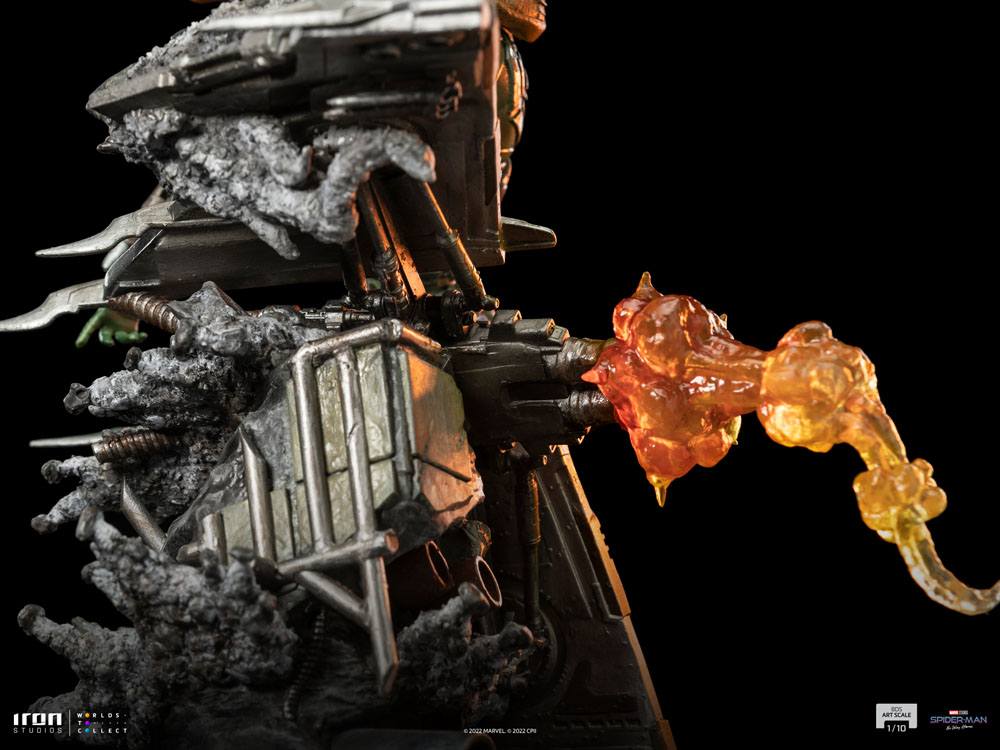 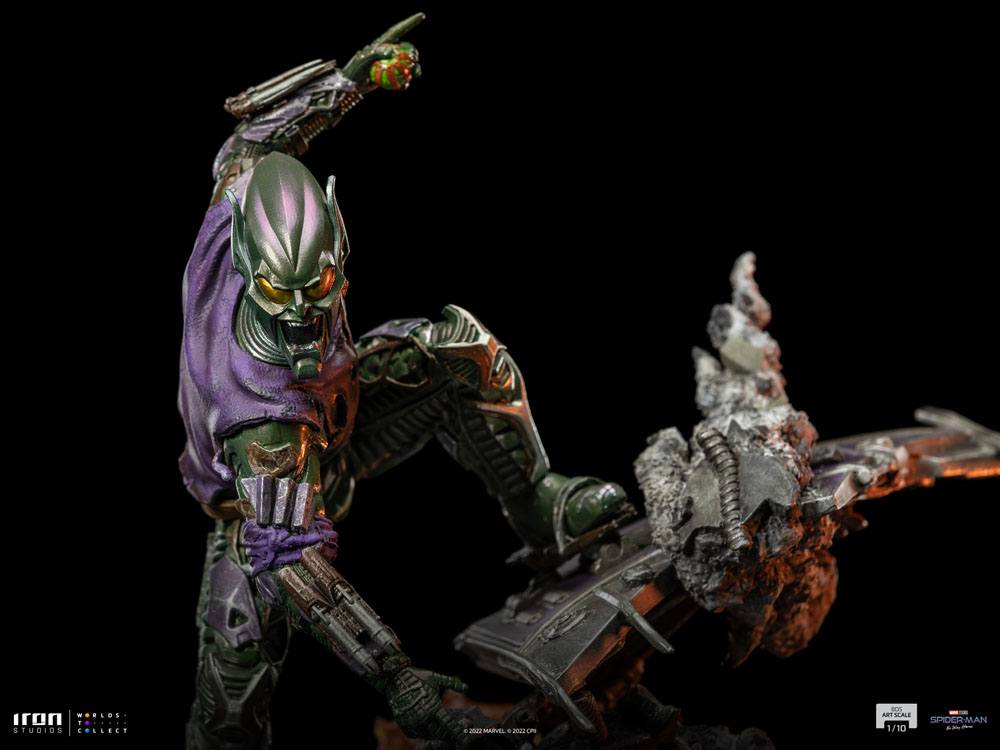 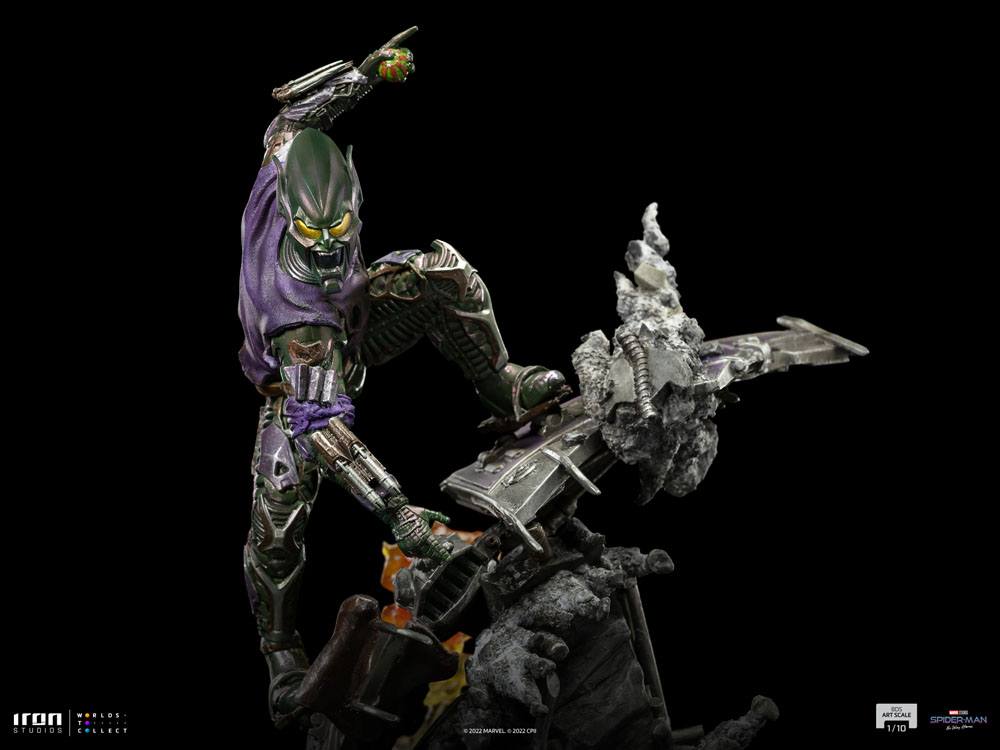 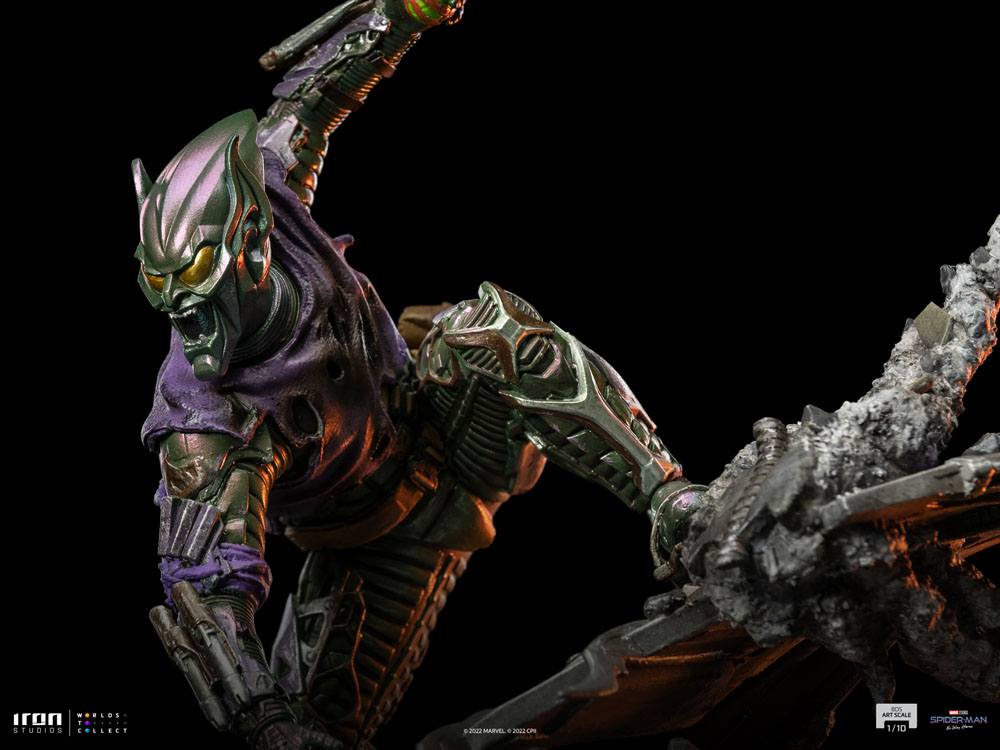 Flying in the night sky of New York with his Goblin Glider over Liberty Island, with an insane laugh the fearsome villain passes through, destroying the metallic structure of a scaffold used in the restoration of the symbolic statue renamed Liberty Avenger. Wearing a metallic green battle suit technologically advanced that enhances his strength and endurance, covered by a ragged purple hoodie, previously used to hide his armor, as a spectrum created on Halloween, he prepares himself to throw one of his Pumpkin Bombs. Inspired by his striking appearance in the movie “Spider-Man: No Way Home”, Iron Studios bring the statue “Green Goblin BDS – Spider-Man: No Way Home – Art Scale 1/10”, with Spider-Man’s legendary archenemy masterfully played again by Willem Dafoe in the MCU.

A brilliant scientist and CEO of Oscorp, a company specializing in military research, Ph.D. and businessman Norman Osborn tested a still unstable human enhancement serum on himself. The formula increased his strength to superhuman levels, but as a side effect caused a dissociative identity disorder, transforming the good Doctor Osborn into a chaotic and sadist psychopath. Wearing special armor capable of remotely controlling a flight glider, he created a scary mask to hide his identity and became the villain known as Green Goblin. Presented as Spider-Man’s first enemy in the 2002 movie, the precursor of the trilogy directed by Sam Raimi, when Dr. Strange tried to cast the spell to make everyone forget that Peter Parker was Spider-Man, such enchantment affected the Multiverse’s balance, opening portals that brought over
villains that knew about the arachnid hero identity in other universes including the Green Goblin.