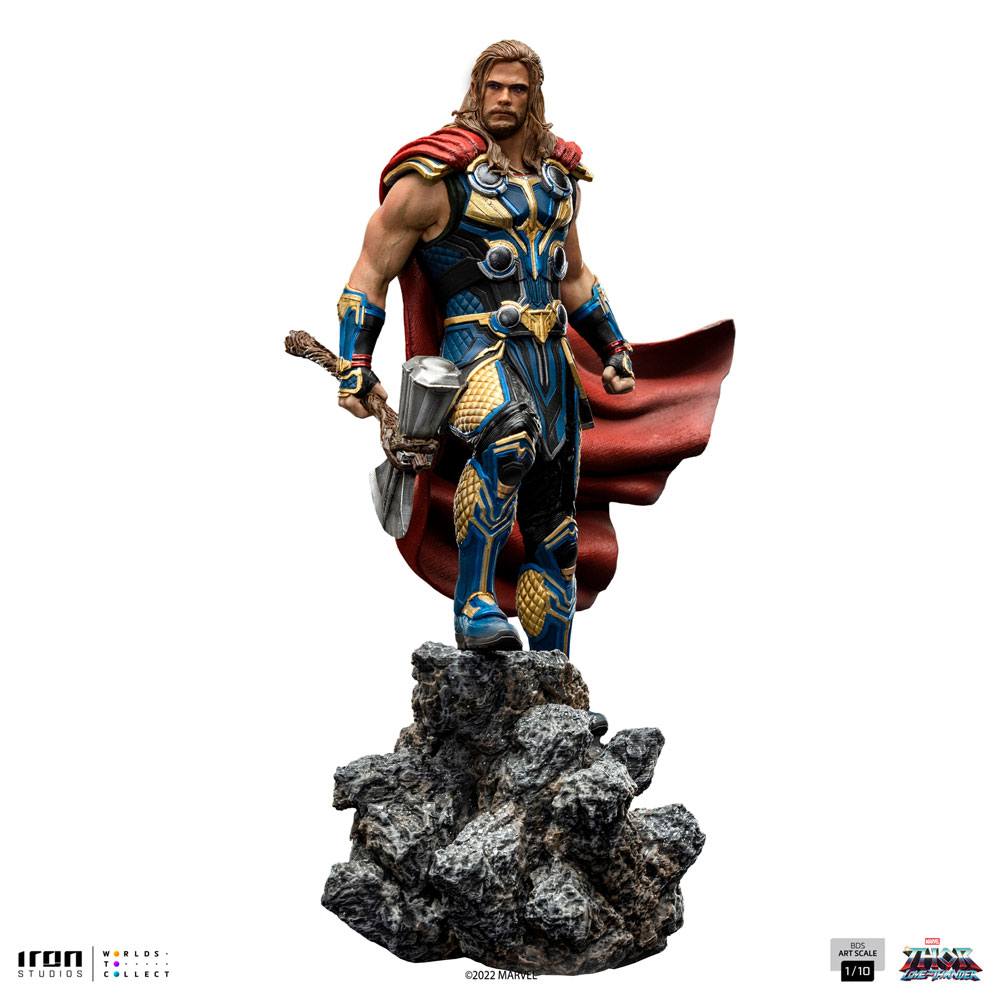 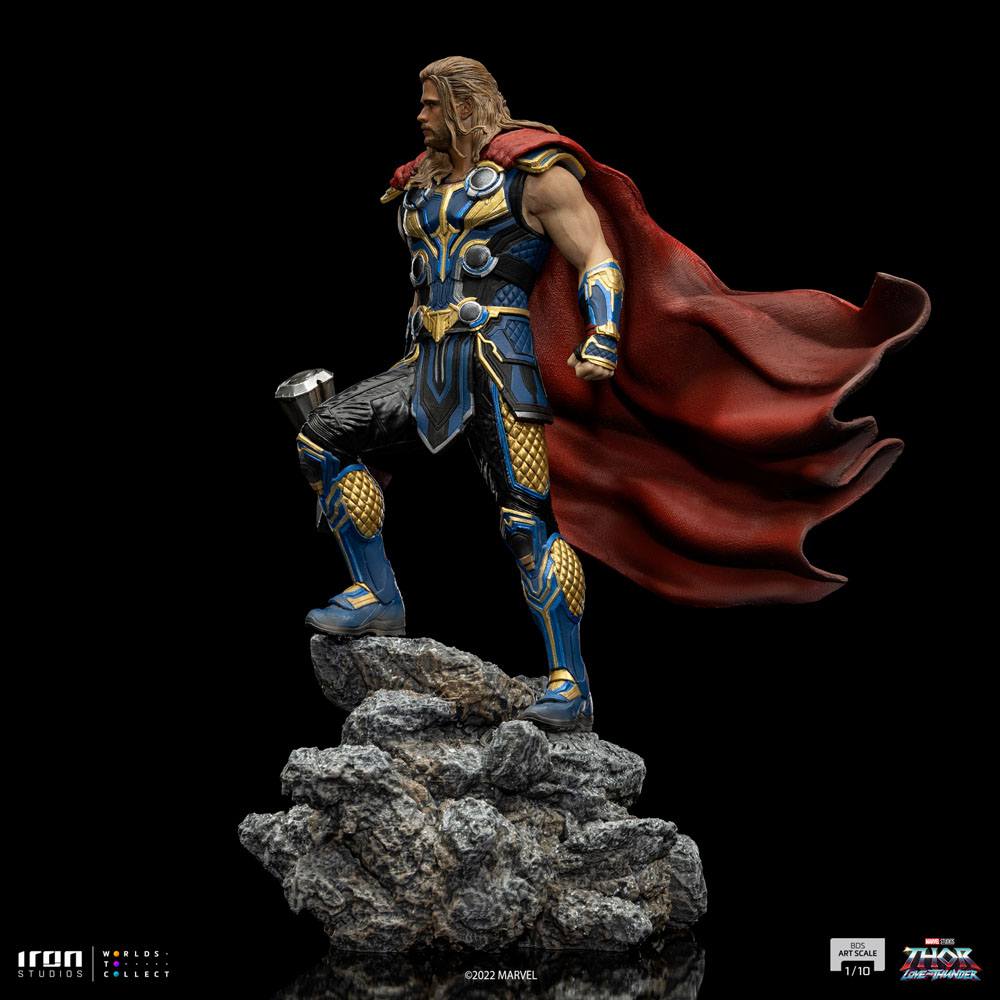 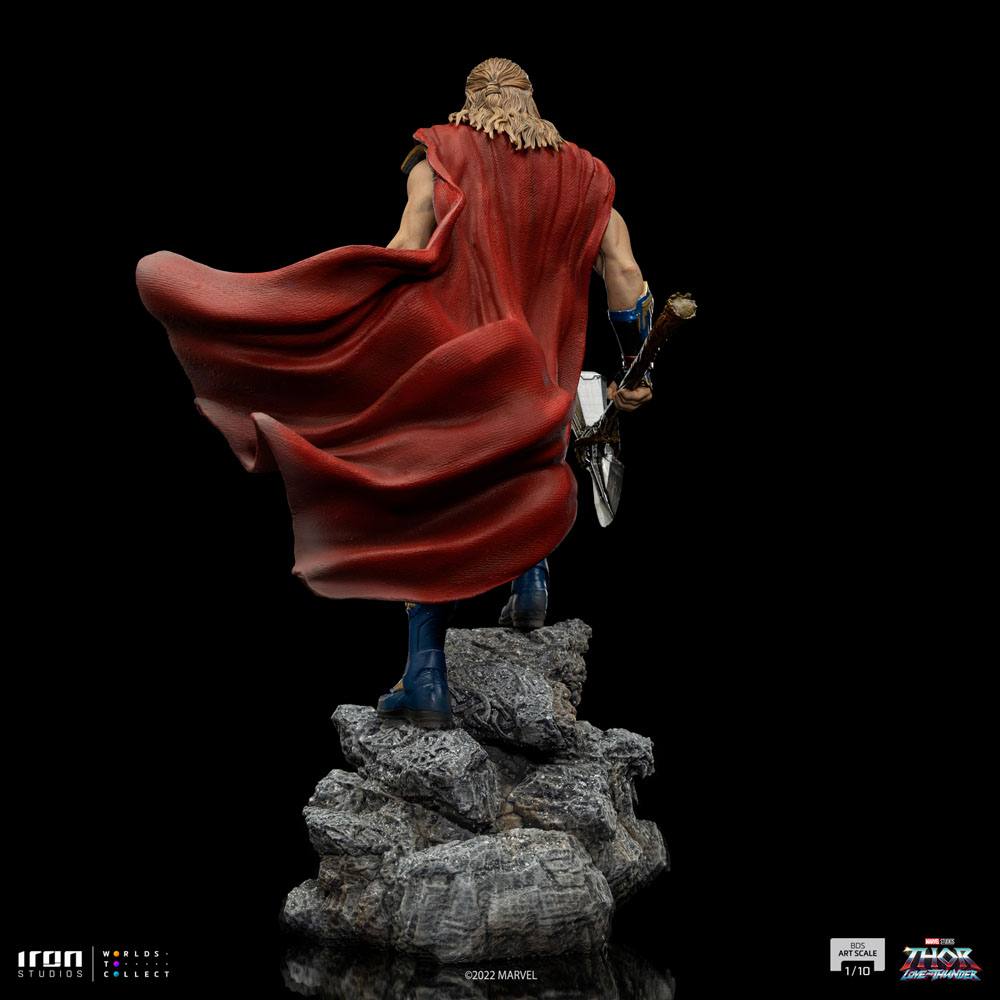 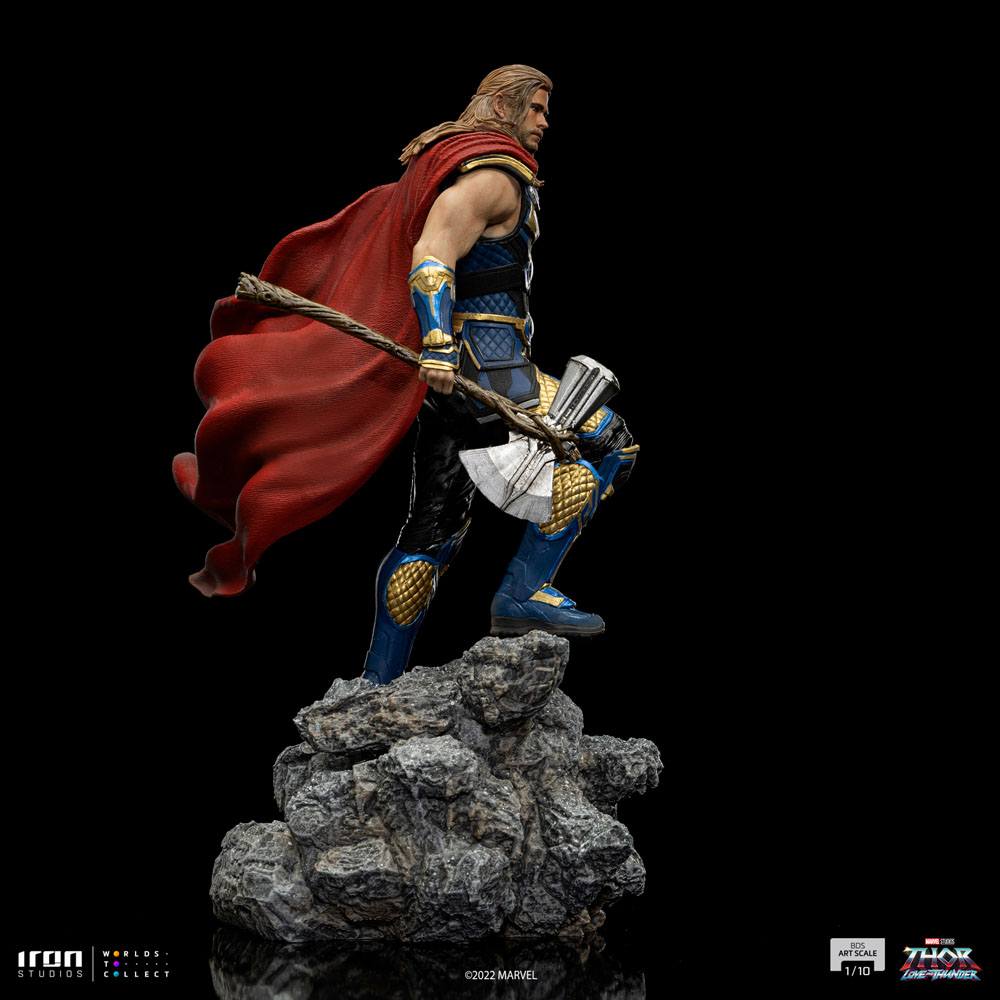 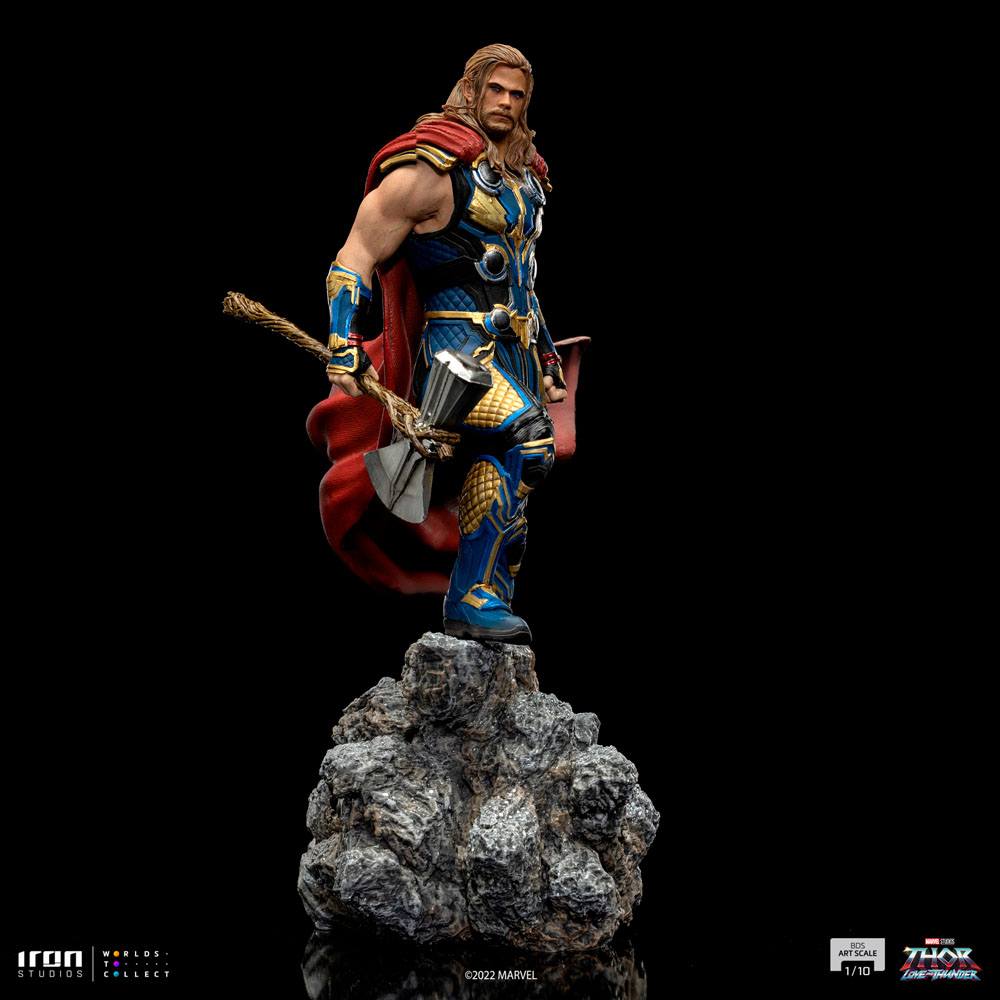 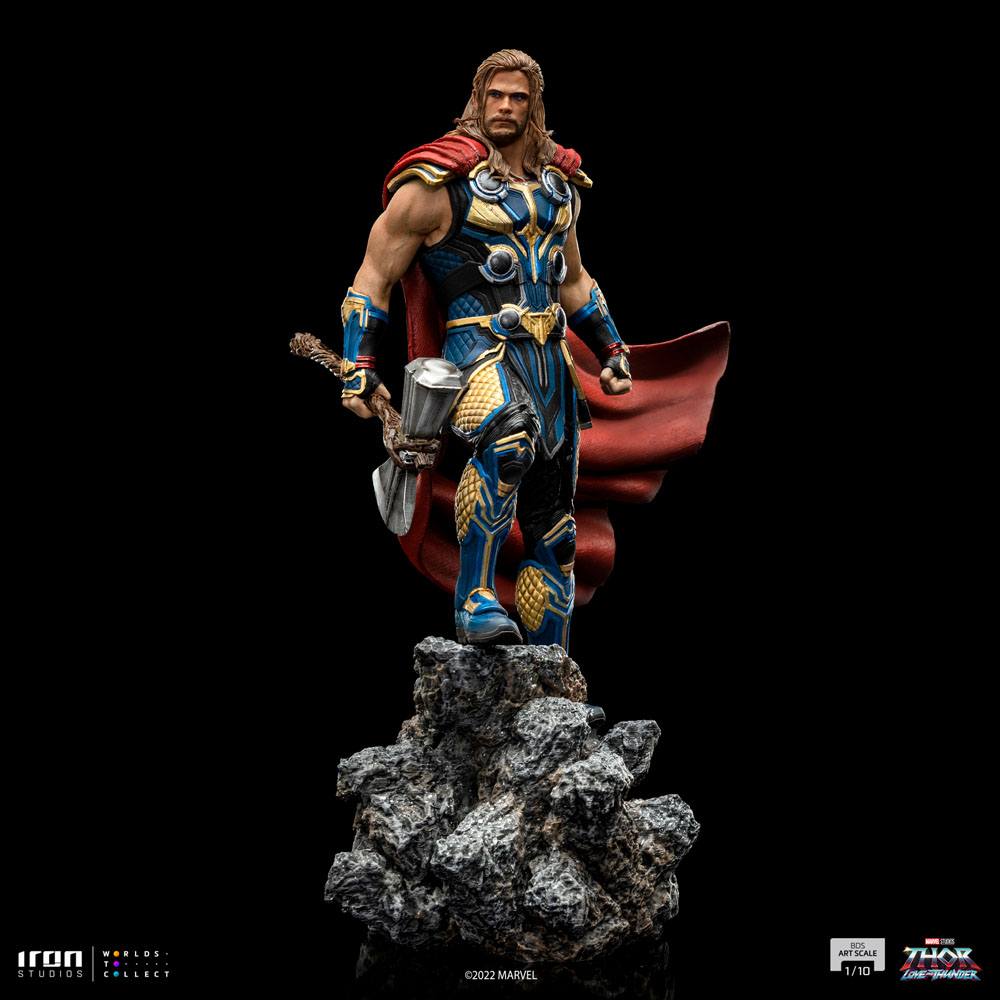 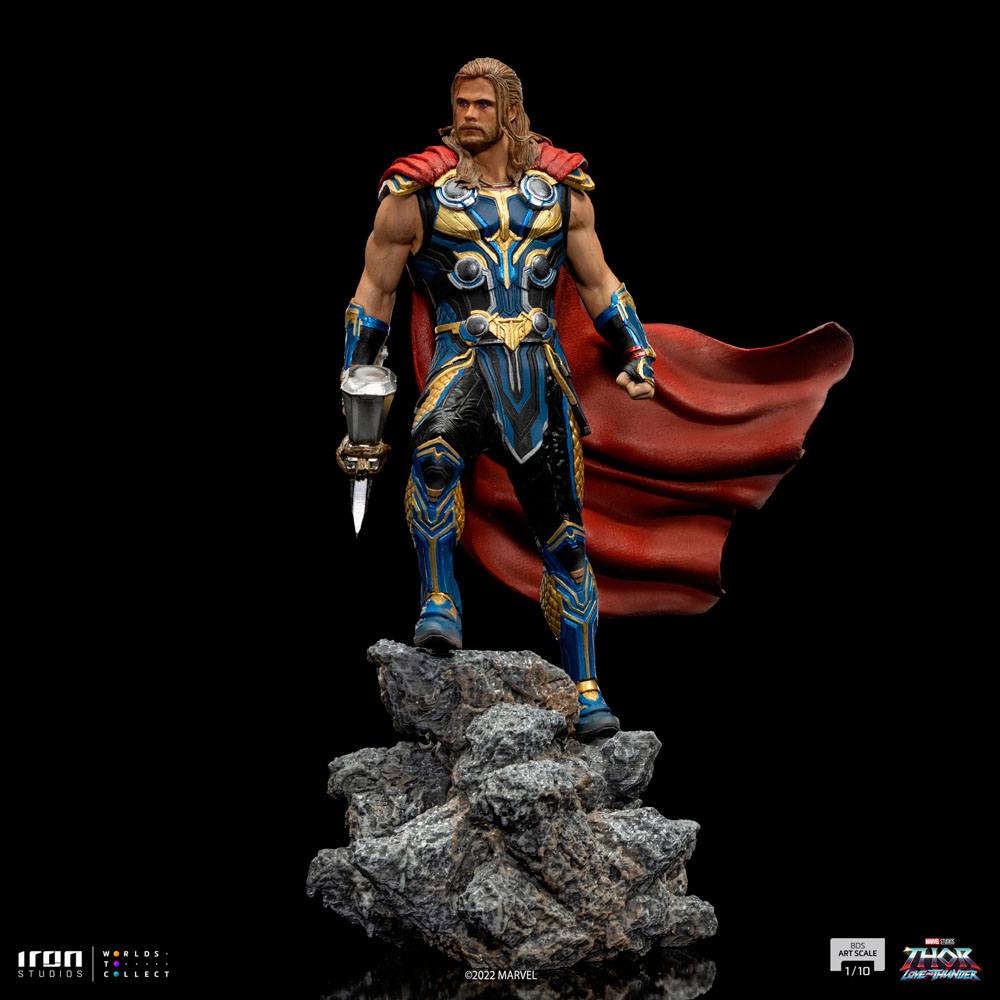 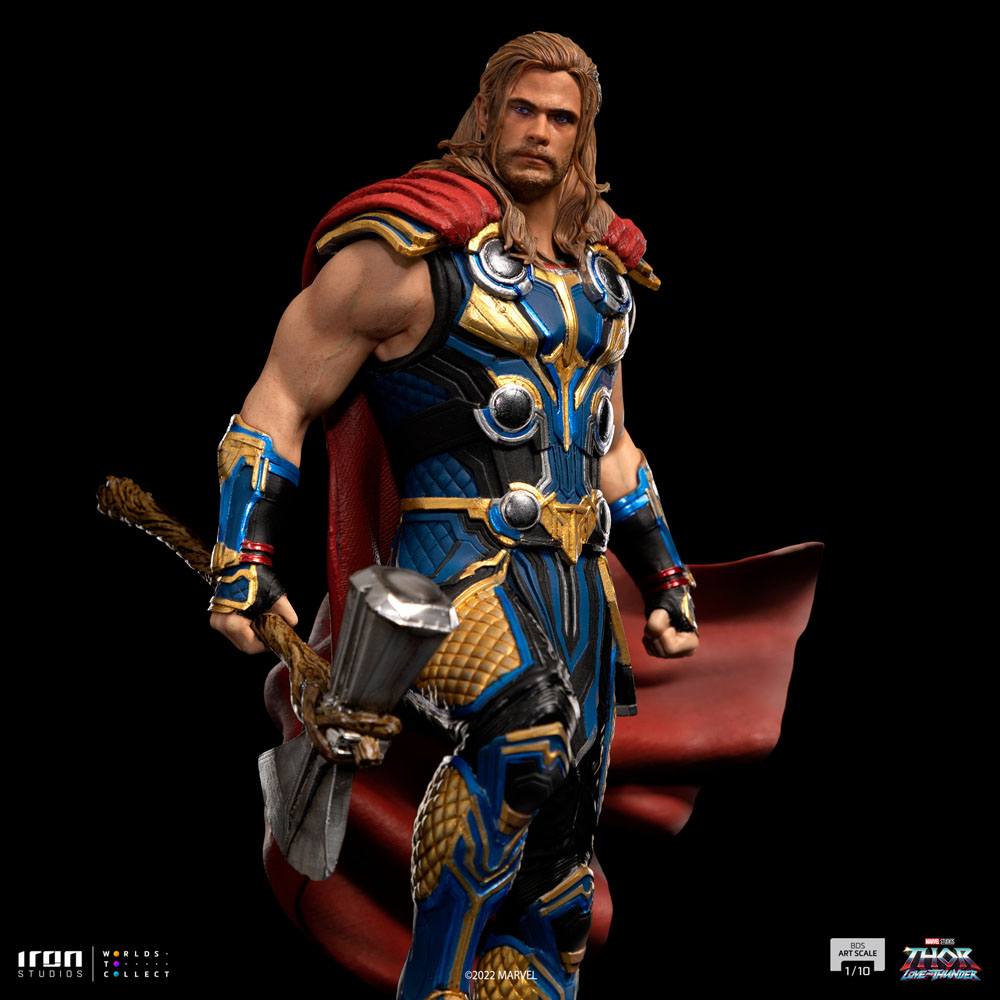 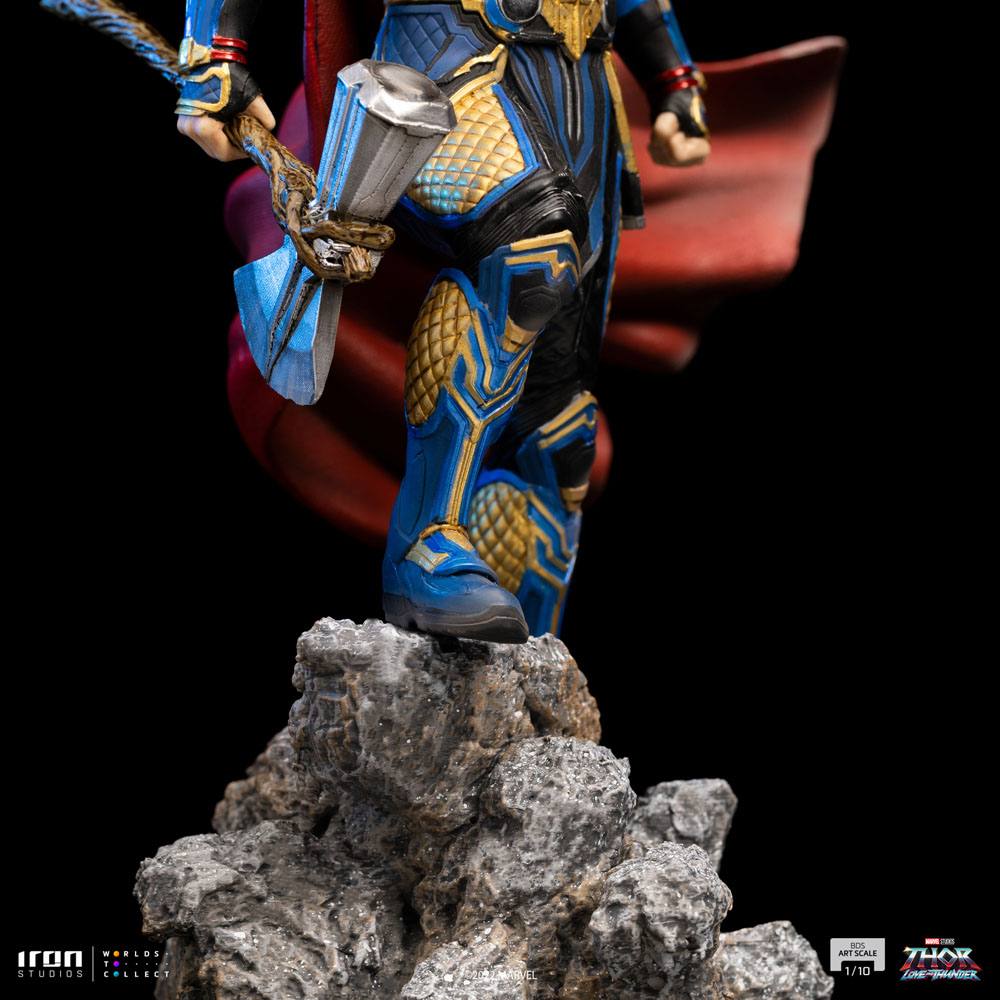 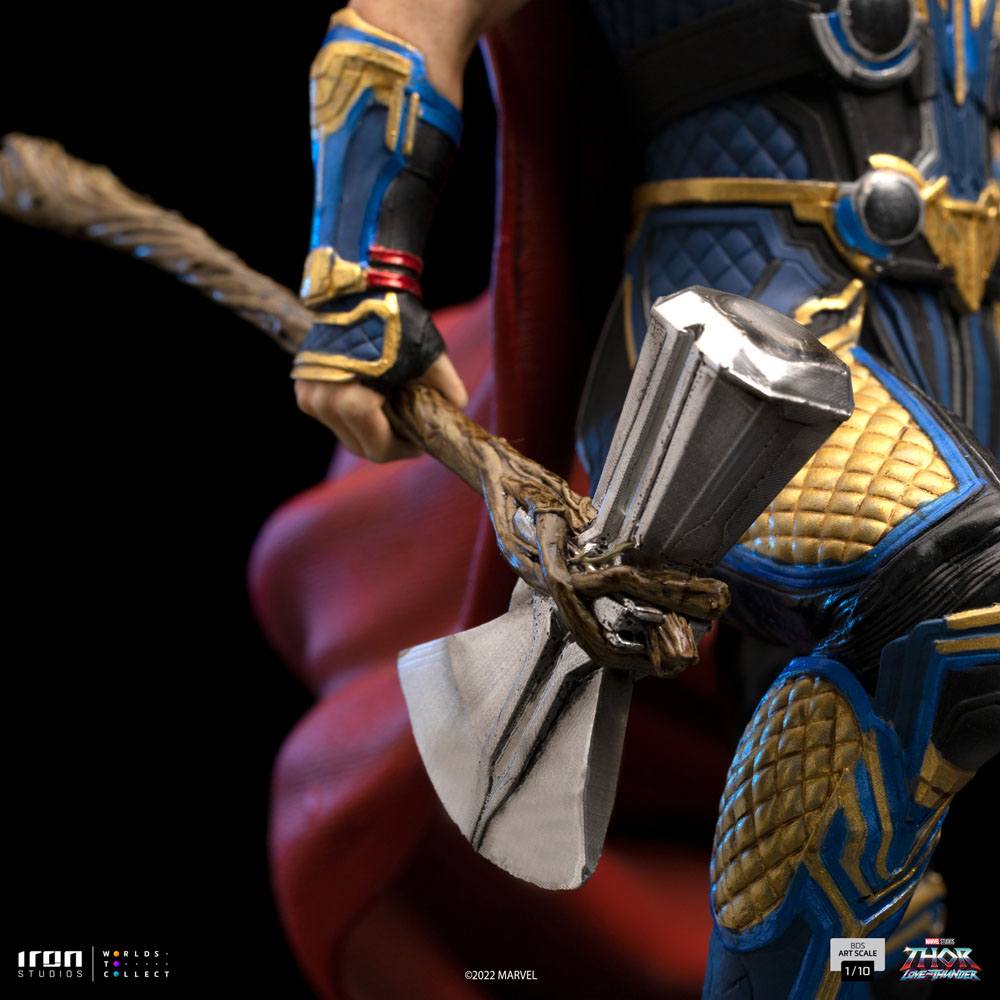 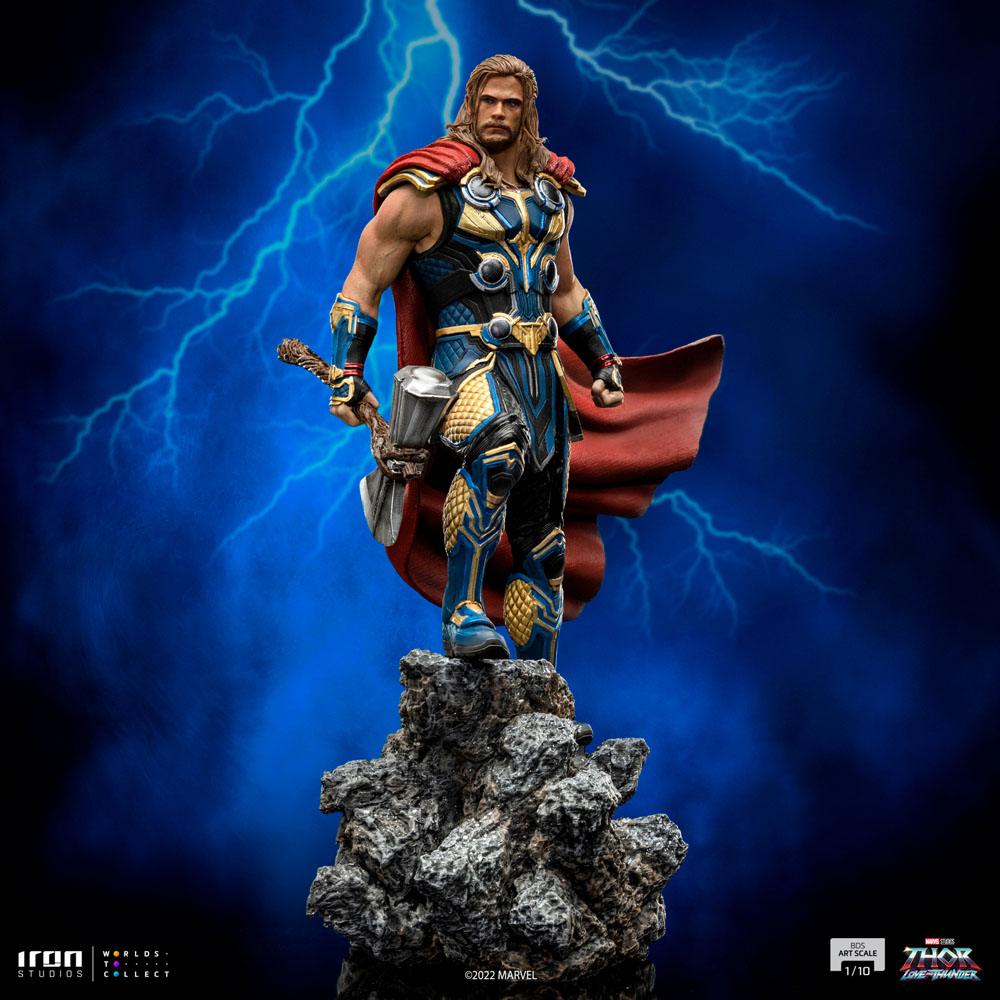 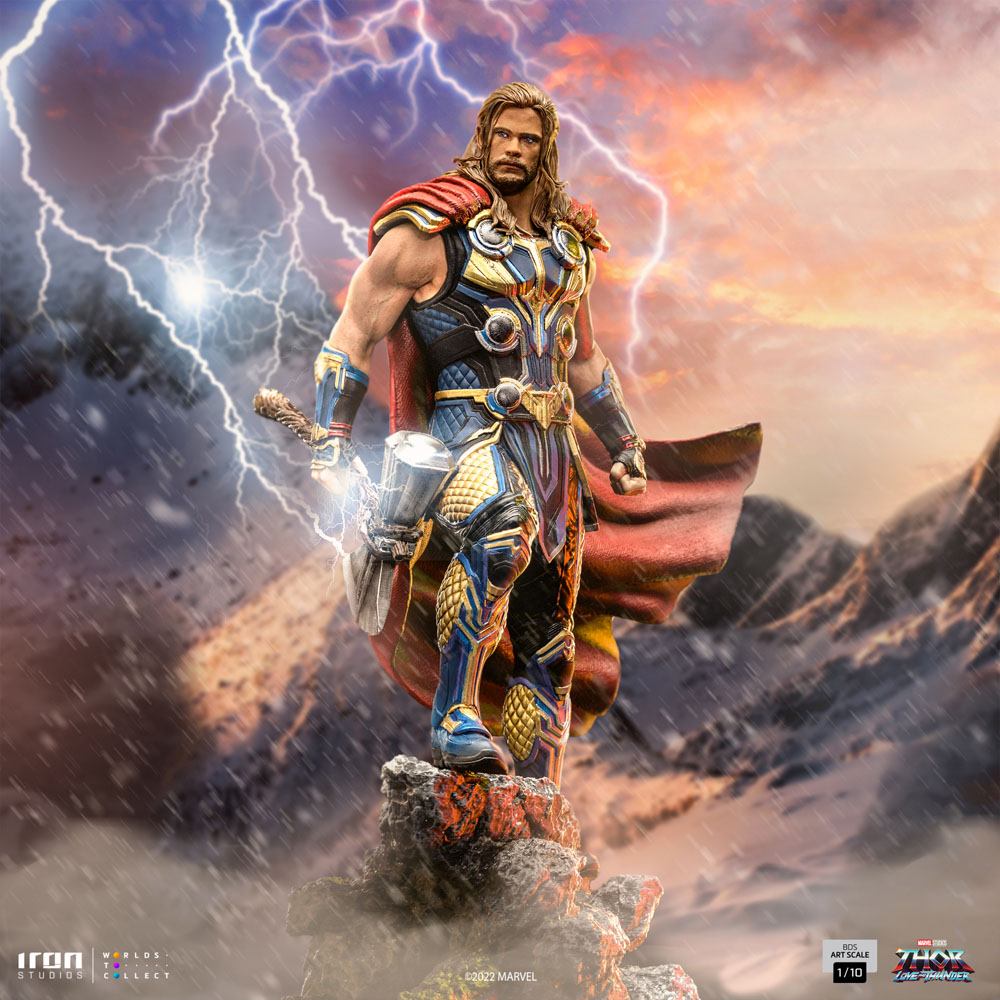 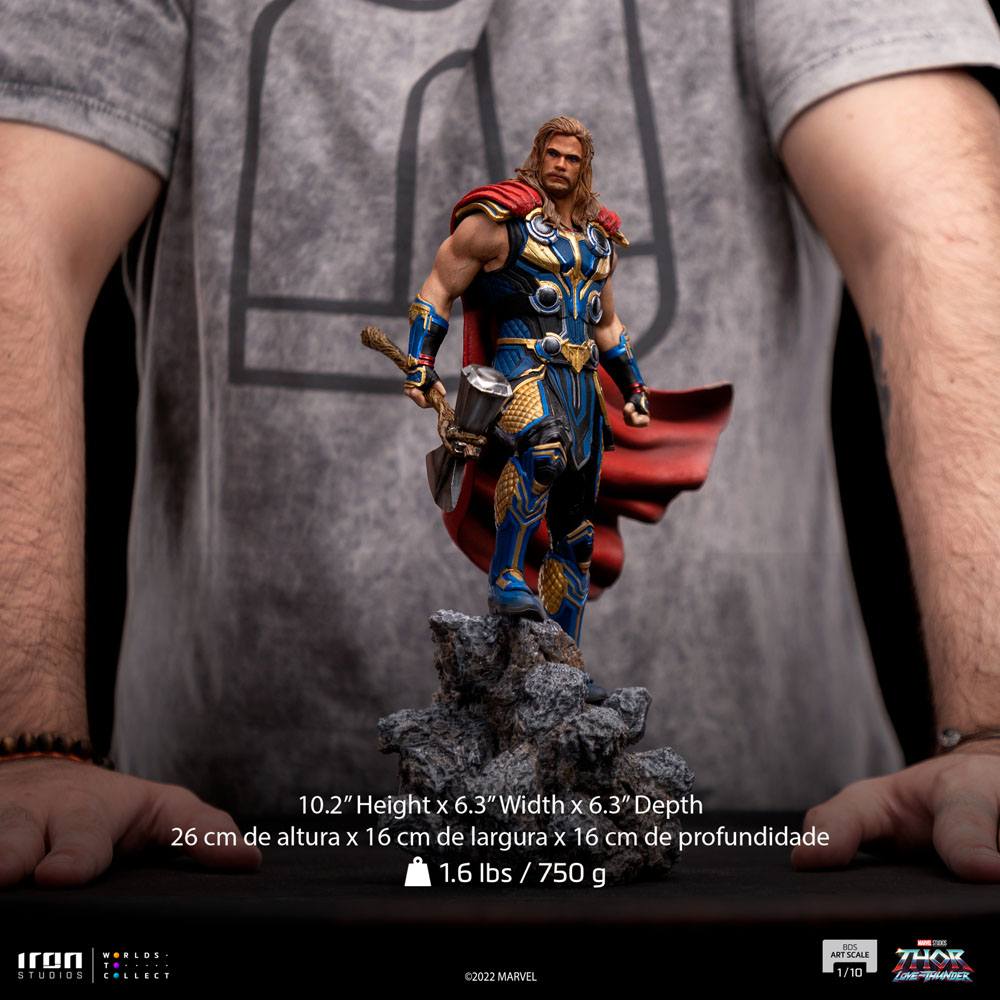 After suffering many personal losses, Thor Odinson, the God of Thunder, left the Avengers and moved for a while to Tønsberg, a village in Norway also known as New Asgard, inhabited by the Asgardian survivors of the destruction of their original world. Depressed and feeling responsible for the death of those he loved, Thor proclaimed the warrior Valkyrie to succeed him as queen of his people and joined the Guardians of the Galaxy on a journey through space next to his friend and partner Korg, a warrior with a rocky body of the Kronan race. Upon becoming aware of the threat to his people known as Gorr, the God Butcher, a galactic assassin searching for revenge, Thor and Korg returned to New Asgard to protect them, arriving while their people were attacked by the villain. In the battle, the God of Thunder gets help from a warrior wielding his old Mjølnir hammer repaired, and dressed like him, with an Asgardian armor and winged helmet. Thor demanded that she revealed herself to him, and she removed her helmet surprising the hero when he saw that it was his old girlfriend, Jane Foster. The God Butcher ran away taking a group of Asgardian children, and Jane, now worthy of his powers and calling herself the Mighty Thor, goes alongside Valkyrie, Thor, and Korg to the Omnipotence City, home of a pantheon ruled by Zeus, king of the gods of Olympus, seeking for help to face Gorr and rescue the children kidnaped by him.

Over a rocky mountain pedestal, wielding the powerful and enchanted axe Stormbreaker, the Son of Odin appears wearing his new Asgardian armor in shades of blue, black, and gold. With a long red cape waving on his back, he prepares to face a horde of shadow creatures summoned by the fearsome God Butcher. Inspired by the fourth movie “Thor: Love and Thunder”, Iron Studios present the statue “Thor BDS – Thor: Love and Thunder – Art Scale 1/10”, with the God of Thunder played once again by Chris Hemsworth, composing the perfect pair with the statue “Mighty Thor Jane Foster BDS – Thor: Love and Thunder – Art Scale 1/10” by Iron Studios.